'He was fine just like the rest of us': United flight witness describes brutal removal of screaming passenger 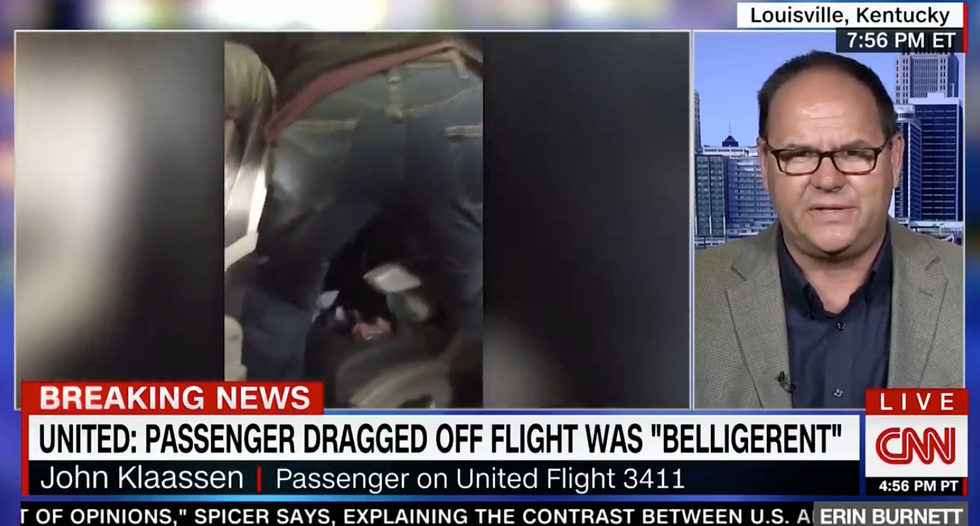 An United passenger who witnessed Chicago airport police forcibly remove an Asian male from the plan spoke with CNN’s Erin Burnett on Monday, describing the shocking and unbelievable scene that unfolded before him Sunday afternoon.

John Klaassen was flying with the man who was later pulled from his seat and dragged through the airplane, calling him “very pleasant.”

“It’s stunning to believe,” Burnett said to her guest before asking about United’s claim that the man was “disruptive and belligerent” as he was asked to leave.

“Was he?” Burnett asked.

Klaassen insisted the man was neither of those things, pointing out that “rather than negotiate up a higher price or try and get other people to volunteer,” the airline simply “chose four people to get off the flight.”

“He was fine, he was like the rest of us,” Klaassen said. “A little stunned that they would suggest such a thing. Not disruptive at all. When she came on and said he had to leave, he said, ‘Look, I’m a doctor, I have patients tomorrow, I need to get to Louisville—I’m not getting off the flight.’”

Klaassen added he "couldn’t believe" how the situation escalated.

“I understand that United could ask us to leave,” Klaassen said, "What I was shocked by was that they weren’t willing to raise the price … They would have easily had more volunteers if they had just done that.”

“None of us could believe that it would get to that point of violence,” he added. “When the police came on, they were just determined to take him off the plane.”