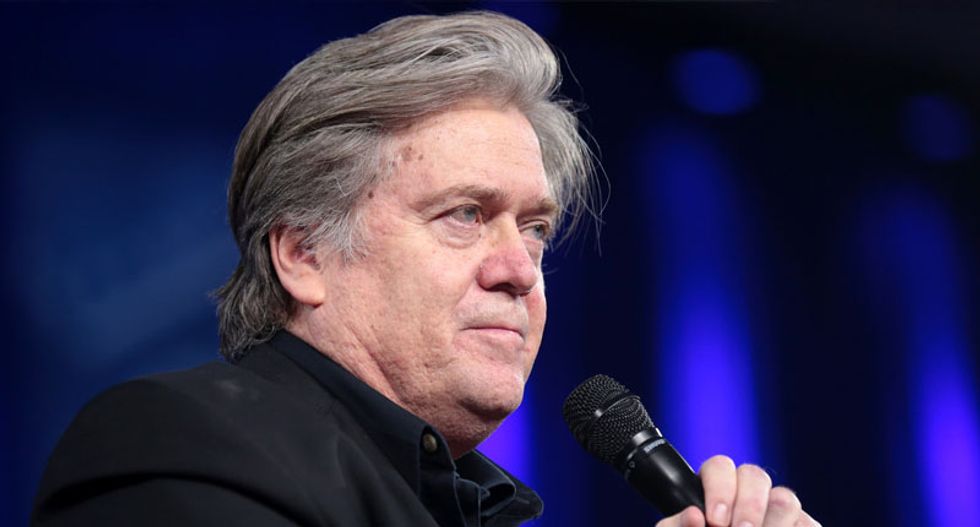 Trump, who the Times notes “has a long history of turning quickly on subordinates,” has apparently tuned on Bannon—conservative media darling who’s been long-heralded as the president’s “Great Manipulator.”

“Bannon is a brilliant pirate who has had a huge impact,” Newt Gingrich said of the chief strategist. “But White Houses, in the end, are like the U.S. Navy—corporate structures and very hard on pirates.”

According to sources that spoke with the Times and the Washington Post, Trump’s comments to the New York Post Tuesday—wherein the president insisted he is his own strategist and relegated “nice guy” Bannon’s role to “a guy who works for me"—were meant to put the chief strategist in his place.

Reports of Bannon’s potential ouster have been circulating in recent weeks as clashing power structures—most notably between Bannon and Trump’s son-in-law Jared Kushner—became clearer. The president on Tuesday insisted he told the pair to “straighten it out or I will.”

There’s concern that ousting Bannon would upset core Trump supporters—hard-right conservatives who took a liking to the president’s populist, anti-globalist approach championed by Bannon. During a press conference with NATO Secretary General Jens Stoltenberg, the anti-globalist platform was notably absent from the president's dialogue.

“I think firing Bannon would be a huge mistake for Trump,” conservative radio host Steve Deace told the Times. “Hell hath no fury like a Bannon scorned.”

Britain faces its largest ever strike by health workers on Monday as tens of thousands of nurses and ambulance workers walk out in an escalating pay dispute which the health minister said would place further strain on the National Health Service (NHS).

Nurses and ambulance workers have been striking separately on and off since late last year but Monday's walkout involving both, largely in England, will represent the biggest in the 75-year history of the NHS.

According to the Sonntagszeitung and Le Matin Dimanche weeklies, the Swiss police file on the man who today serves as the spiritual head of the Russian Orthodox Church "confirms that 'Monsignor Kirill', as he is referred to in this document, worked for the KGB."