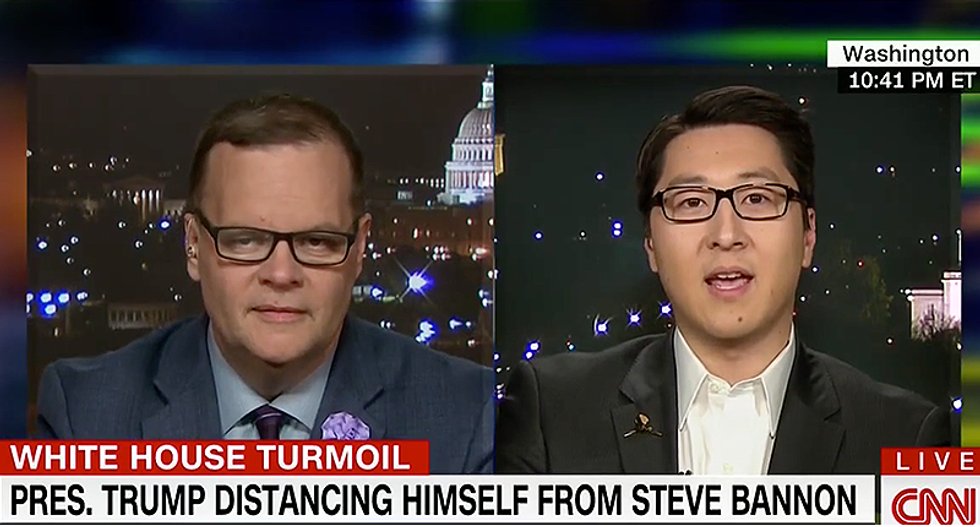 Hell hath no fury like a fired Steve Bannon, according to former Breitbart spokesman.

"He will, I think, unleash the dogs of war on those who he believes put him in this position to be ousted, to be falling out of favor with Donald Trump," Kurt Bardella said.

He went on to say that he doubts Bannon would go directly after Trump, but that Bannon would go after those that would fill the power void left by Bannon's absence. He warns that we'll begin to see much of what we saw weeks ago when suddenly Breitbart News posted several front-page stories attacking Jared Kushner.

Former Breitbart writer Lee Stranahan disagreed, saying that Kushner is the one with a history of going after his opposition.

Host Don Lemon couldn't understand why Stranahan was talking about Kushner when the topic was Bannon. "How would that affect the administration? What would that have to do with anything?" Lemon asked.

Stranahan said that they were targeting Bannon by asking the question.

"I think, that the thing is, if Steve is moved out and Donald Trump veers to the center and abandoning the promises that he made to the base that got him elect elected to the base that carried him through the primaries, I think that Steve will be very instrumental in certainly highlighting that fact every day in the pages of Breitbart," Bardella said. "I think that you're going see throughout the conservative alt-right media a lot of pointed fingers that this is why Trump is not the person you voted for. This is why he's changed course and direction. It's their fault and you should blame them for it. I don't know how you could think that wouldn't happen."