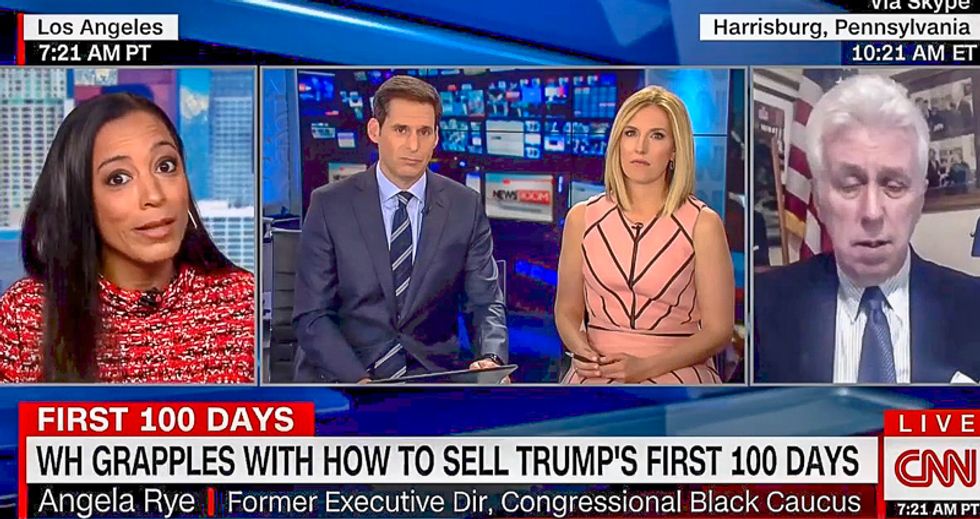 CNN contributor Angela Rye on Tuesday pointed out that President Donald Trump had been plagued with "many epic fails" during his first 100 days in office.

During a discussion on CNN, ardent Trump backer Jeffrey Lord asserted that Trump's critics could no longer suspect Donald Trump's campaign of colluding with Russia after the president ordered an attack on Syria that reportedly angered Russian President Vladimir Putin.

Reflecting on the president's first 100 days in office, Rye argued that the White House had a misguided view of success.

"Wins are determined by how they impact the American people," she explained, noting the disparity with President Barack Obama, who in his first 100 days signed an equal pay law and a law to create jobs and build infrastructure.

"And then I think you compare that to what I think I would characterize as many epic fails by the Trump administration," she continued. "The Muslim ban and the various iterations of that. The [border] wall, the fact that he said to taxpayers, 'Okay, I'm just kidding. Actually, you all will pay for the wall.' The number of moments where they've had to pivot."

"I think the only real thing where Donald Trump has won... is golfing. He is winning on golfing. He's 28 days out of 100 into golfing. And it's so funny because he was the critic-in-chief about Barack Obama's golf game."

CNN host noted that Trump was on track to spend more on travel in his first year in office than Obama had spent during his entire eight years.

"Three million dollars per golf trip!" Rye shot back. "Melania staying in New York City -- a million dollars a day... I am so surprised that you won't even agree with me on this point. You're talking about wins for the American people. I would push back. Climate change is a real thing."

"You talk about me and my friends, tell your friends that there are icebergs melting, okay! And your guy is dialing back regulations that are harmful, not just to the American people, but globally."