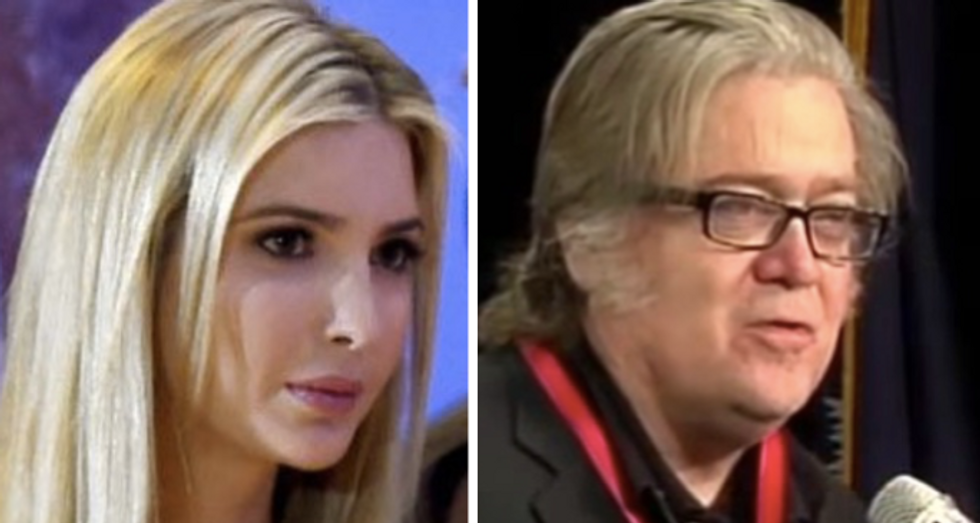 A Saturday New York Times article revealed that President Donald Trump's eldest daughter Ivanka is the individual most responsible for the diminution of former Breitbart.com CEO Stephen Bannon's role in the White House.

For weeks, rumors have swirled that the controversial white nationalist has fallen out of favor with the president. Trump reportedly ordered his son-in-law Jared Kushner and Bannon to have a sit-down at Mar-a-Lago resort last weekend to "work it out" and quell the ongoing bickering between Bannon's ultraconservative coterie and the more moderate faction loyal to Kushner.

As pressure has borne down on the Trump administration to produce some victories to mark its first 100 days in office, Bannon has reportedly been finding himself increasingly isolated and overruled in the Oval Office. According to the Times, the president's daughter has been making a case for Bannon's removal to her father "in the strongest terms."

"Ms. Trump has never been close to Mr. Bannon, although she appreciated the ferocity of his work. She puts him in the category of colorful, rough-hewed characters her father collects, with the likes of Roger Stone, a longtime Trump operative," the Times said.

"In recent weeks, she has spoken bluntly about Mr. Bannon’s shortcomings to the president. She was especially incensed by articles she believed were planted by Mr. Bannon’s allies suggesting he, not her father, honed the populist economic message that helped sweep the Midwest. She made that point in the strongest terms to her father, who agreed, according to a family friend," the report continued.

Ivanka Trump reportedly sees one of her roles in the White House is to serve as a protector of the family brand. Throughout the campaign and since her father's inauguration, she has reportedly worried that the ultraconservative Bannon -- with his failed Muslim ban and repeated attacks on her husband by Breitbart.com -- will damage the Trump brand.

Bannon has made his contempt for the "globalist," "cuck" wing of "West Wing Democrats" led by Kushner abundantly clear. This week, speculation has abounded as to whether Bannon, if forced out, would take vengeance against the Trump administration.

"Mr. Trump would prefer the situation with Mr. Bannon to stabilize, according to people familiar with his thinking, and to keep Mr. Bannon on board, albeit in a more circumscribed role, than see him become a populist critic outside the gates," the Times said.