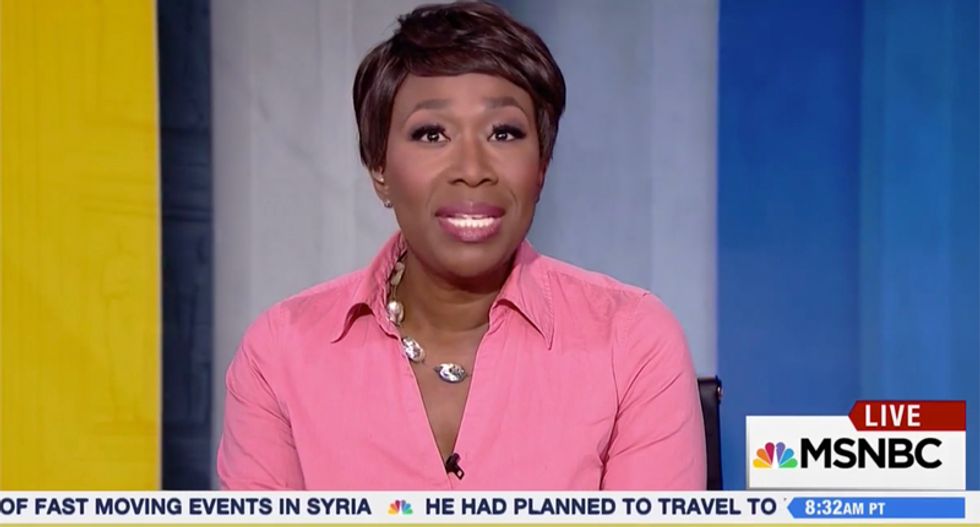 Sharing footage dating back to Operation Desert Storm in 1991, MSNBC host Joy Reid warned her cable colleagues to not treat Thursday's flashy Syria missile attack as "a shiny new toy" -- absent the realities on the ground -- that they can turn into ratings gold.

"For 43 days in early 1991, the United States' first war in the Persian Gulf was the original reality TV," Reid began. "Day after day, millions tuned in for the Operation Desert Storm show on TV as U.S. military bombardments and Iraq scud missile attacks were brought live into our living rooms thanks to CNN, the only 24 hours game in town."

"Back then, for the first time in television history," the AM Joy host reminded her audience, "an American war was beamed into homes all around the world, around the clock."

"There was Iraqi leader Saddam Hussein, whose occupation of Kuwait, we were told, would expand into a Middle East invasion, unless the U.S. did something to stop him. and we watched an entire cast of characters play their parts against the backdrop of Pentagon-provided footage that put the best possible face on the mission," Reid explained. "You saw the flashes and the smoke as the bombs went up -- but never the severed limbs and carnage when they landed."

"Years later when the U.S. once again waded into a conflict in the Middle East, the Iraq war became the shiny toy the news media just could not resist, thanks to improved broadcast technology and unprecedented access," she added before offering a cautionary note.

"That war that cost more than $2 trillion and hundreds and thousands of lives was based on a weapons of mass destruction claim that was completely and utterly false," she lectured. "It's a lesson that the media would be wise to remember this week as we turn our focus from the very real scandal of Donald Trump's Russia ties to the shiny object of Trump's assault."