March for Science draws massive crowds across US 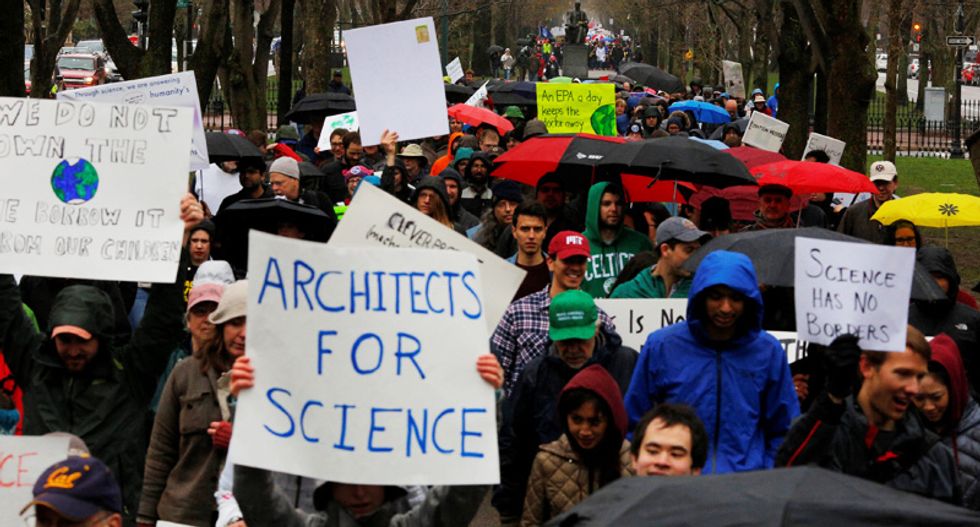 Demonstrators march down Commonwealth Avenue from Massachusetts Institute of Technology (MIT) to the March for Science rally on the Common in Boston, Massachusetts, U.S., April 22, 2017. REUTERS/Brian Snyder

Thousands of scientists and people from other walks of life turned out in Washington and New York on Saturday for Earth Day events that organizers have framed as a "celebration" of science to counter a growing disregard for evidence-based knowledge.

The "March for Science" festivities included "teach-ins" on the National Mall and parades in midtown Manhattan and hundreds of other cities and towns. The events were non-partisan, according to organizers, aimed at reaffirming "the vital role science plays in our democracy," according to the march's website.

Still, the marches were effectively protests against steep cuts that President Donald Trump has proposed for federal science and research budgets and his administration's skepticism about climate change and the need to slow global warming.

"It's important to show this administration that we care about facts," said Chris Taylor, 24, who was part of an early crowd of about 15,000 who gathered on the Mall for teach-ins on topics like climate change, water quality and sustainable food. The event finished with a march from the Washington Monument to Union Square.

"It just seems like they're not really concerned about economic growth or creating new technologies, just catering to massive corporations," said Taylor, who is earning a PhD in robotics at George Mason University in Virginia.

March for Science is the latest in a series of national demonstrations staged since Trump's inauguration nearly 100 days ago. Previous marches and protests have focused on a range of partisan issues, from abortion rights to immigration policy.

The White House did not respond to a request for comment on Saturday's marches but Trump released a statement promoting his administration's steps to guard against pollution while minimizing limits on industry.

"My administration is reducing unnecessary burdens on American workers and American companies, while being mindful that our actions must also protect the environment," Trump said in a statement.

"Rigorous science is critical to my Administration's efforts to achieve the twin goals of economic growth and environmental protection," he said.

In the past, Trump has said climate change was a hoax that was stifling policies to foster economic growth.

His administration is considering withdrawing from the Paris Agreement, a global accord aimed at reducing global emissions of carbon dioxide and other greenhouse gases. Last year the United States, under President Barack Obama, joined more than 190 other countries in signing the pact.

March organizers are also worried by what they see as growing skepticism from politicians and others on topics such as vaccinations, genetically modified organisms and evolution.

The scientific community's direct involvement in a national policy debate has stirred some criticism about whether scientists should get involved in politics. But organizers have defended the march as crucial because of the threat posed by discrediting scientific consensus and restricting research.

"As scientists, as human beings, our mandate is clear - it's to stand up for what we know to be true," said Kellan Baker, a senior fellow at Johns Hopkins School of Public Health and one of the speakers on the National Mall.

That theme was echoed by many who showed up in Washington for teach-ins, which organizers said were a centerpiece of the initial Earth Day held in 1970 to call attention to the environment.

"Science isn't respected and it needs to be," said Sarah Binkow, 22, a civil engineer who traveled from Pontiac, Michigan, to attend the Washington rally.

"Being here definitely gives me hope that there's this overwhelming population that supports science and supports scientific theory," she said.

The speakers in Washington included Bill Nye, an educator and television personality known as "the Science Guy," and Mona Hanna-Attisha, a pediatrician and public health advocate who first called attention to the high levels of lead in the drinking water of Flint, Michigan.

"Flint is what happens when we dismiss science," she said, referring to the 2014 crisis.