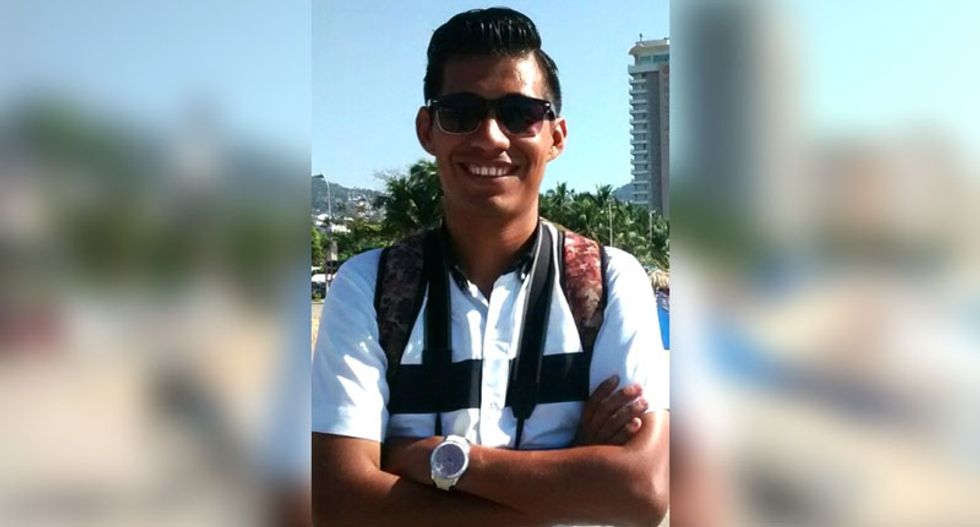 When Martin Mendez Pineda fled the Mexican state of Guerrero in February, he escaped a living hell where being a reporter meant he had a constant target on his back. Yet he walked into a new nightmare after seeking asylum in El Paso, according to his attorney.

Mendez Pineda, 26, has been in a detention facility in the Texas border city even after American authorities agreed the reporter had a credible fear of returning to his country. His attorney, Carlos Spector, said it’s symbolic of a change under the Trump Administration where prolonged detention — even for people with no criminal history — is the latest tool in the White House’s effort to discourage people fleeing violence from seeking help in the United States.

Spector’s immediate concern isn’t the asylum process that could lay ahead but instead the continued detention of someone who would normally be released while his case is meandering through the long and complicated series of hearings and interviews. He fears the detention will become a pattern and be used against other foreigners seeking safe harbor after Trump issued his Jan. 25 executive order on immigration.

“This process of incarcerating immigrants seeking refuge in the United States has been a policy that has existed that has just gotten worse under Trump,” he said. “We’re here to demand his freedom and to denounce the criminalization of the political asylum process as a political tool.”

The federal Department of Homeland Security indicates it is just vetting asylum applicants to make sure the revamped process is fair.

“The goal of DHS is to ensure the asylum process is not abused,” the agency explains on its website. “The asylum officer shall make a positive credible fear finding only after the officer has considered all relevant evidence and determined, based on credible evidence, that the alien has a significant possibility of establishing eligibility for asylum, or torture protection.”

Mendez Pineda fled the resort city of Acapulco after he was attacked by Mexican federal officers and later threatened at gunpoint by six armed men, according to case documents provided by Spector’s office.

The attacks were in retaliation for his watchdog reporting on abuses committed by Mexican government officials and occurred in a city considered the second-most-violent in the world behind Central America’s San Salvador. (The homicide rate in Acapulco is 108 per 100,000 people, compared to San Salvador’s 137 per 100,000, according to an analysis by The Economist.) Mendez Pineda's case caught the attention of Paris-based advocacy group Reporters Without Borders, who wrote Mendez a letter of recommendation to help bolster his case. The Committee to Protect Journalists, based in New York, has also taken note.

After Mendez Pineda passed his "credible fear" interview, Spector sought to have him released on parole while his client’s case was pending. The documents from Spector’s office indicate his client was denied a release because he didn’t have significant ties to the community and because he was a flight risk. Spector said both excuses are laughable because Mendez Pineda has never been convicted of a crime anywhere and because he sought entry on his own and turned himself in.

“To deny a reporter release, who had no criminal history, no threat to the community who presented himself lawfully at the bridge with a strong letter from Reporters Without Borders, to deny that, I think is throwing down the hatchet,” Spector said. “This is a message that if he can’t get out, then no one else will either.”

An El Paso-based spokesperson for Immigration and Customs Enforcement said in an email that each asylum is decided on a case-by-case basis and the agency takes into account several factors, including safety considerations and any other sensitive issues involving the case.

When asked specifically about Mendez’s case, ICE spokeswoman Leticia Zamarripa would only confirm the reporter’s arrival and subsequent transfer into custody.

“Martín Méndez Pineda, 26, from Mexico, entered the United States Feb. 5, 2017, via the Paso Del Norte Port of Entry in El Paso, Texas,” she wrote. “On the same day he was transferred to ICE custody, and then was transported to the El Paso Processing Center in El Paso, Texas.”

Spector, who has represented several dozen Mexican immigrants seeking asylum, knows that even if the parole were to be granted, Mendez Pineda would still face an uphill battle in winning his asylum case and being granted legal status. Despite more than a decade of raging violence in Mexico due to warring cartels and the federal government’s attempts to quell the problem, American immigration officials have been reluctant to grant Mexicans asylum.

Of the 12,831 asylum requests from Mexicans received during the 2016 fiscal year, only 464 – fewer than 4 percent - were granted while 2,624 were denied and thousands more either withdrawn, abandoned or may be pending, according to federal statistics.

The percentage of Mexicans granted asylum is far less than the 13.3 percent overall rate of approved asylum claims in the United States during the same time frame.

BY JULIÁN AGUILAR, THE TEXAS TRIBUNE

After several German cities saw anti-Israel rallies in the wake of resurging conflict between Israel and Gaza in recent days, the government has strongly condemned anti-Semitic protests and promised to ramp up protection for Jewish institutions.

Government spokesperson Steffen Seibert said on Friday that peaceful demonstrations against Israel’s policies were allowed in Germany. “But anyone who uses such protests to shout out their hatred of Jews is abusing the right to protest. Anti-Semitic rallies will not be tolerated by our democracy,” he added.

The man behind Brazil's search for miracle COVID-19 cures