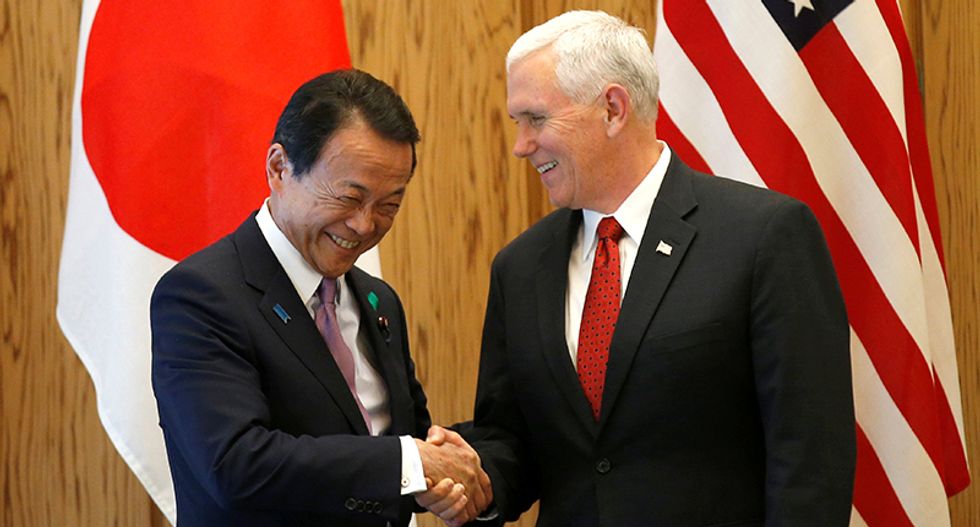 U.S. Vice President Mike Pence on Tuesday put Japan on notice that Washington wants results "in the near future" from talks it hopes will open markets to U.S. goods, adding that the dialogue could lead to negotiations on a two-way trade deal.

"Today we are beginning a process of economic dialogue, the end of which may result in bilateral trade negotiations in the future," Pence told a news conference with Deputy Prime Minister Taro Aso, his counterpart at Tuesday's talks.

"At some point in the future, there may be a decision made between our nations to take what we have learned in this dialogue and commence formal negotiations for a free trade agreement," he said. "But I leave that for the future."

The comments dash the hopes of Japanese policymakers, who have said they want to avoid use of the economic dialogue as a forum to discuss a bilateral FTA that may put them under U.S. pressure to open up highly-protected areas like agriculture.

They also echo those of U.S. Commerce Secretary Wilbur Ross, who told reporters that Washington was eager to increase trade ties with Tokyo through a two-way pact.

Trump campaigned for office on an "America First" platform, saying he would boost U.S. manufacturing jobs and shrink the country's trade deficit with countries like Japan.

Pence said the TPP was a "thing of the past" and Washington would not wait forever for results from the talks.

"When President Trump agreed to this dialogue, he envisioned this as a mechanism for enhancing bilateral commercial relations between the United States and Japan, and achieving results in the near future. And I share that vision and impatience," Pence told Aso at the start of the talks.

Aso in turn said U.S.-Japan trade friction, which soured ties in the 1980s and 1990s, was in the distant past and the allies were now entering an era of cooperation.

"In the past, U.S.-Japan economic relations have started from friction, but we're entering a new area where we start from cooperation," he told the news conference. "Instead of one side telling the other what to do, I want to start debate on a relationship that is mutual and strategic."

In a statement after the talks, the two sides said they had agreed the dialogue should produce "concrete results in the near term." They agreed to hold a second round of talks before the end of the year.

"It's a little bit early to say just what forms things will take, but we are certainly eager to increase our trade relationships with Japan, and to do so in the form of an agreement," Ross said when asked about a possible free trade pact.

Pence arrived in Tokyo from South Korea, where he visited the heavily fortified border separating the North and South. He described the U.S.-Japan alliance as the "cornerstone" of regional security.

Pence's 10-day tour of Asia aims at emphasising that U.S. President Donald Trump wants to boost U.S. trade in the region, despite scrapping the TPP.

Japan had a $69-billion trade surplus with the United States last year, the U.S. Treasury Department has said, expressing concern over what it called the "persistence" of the imbalance.

Japanese officials counter that Tokyo accounts for a much smaller chunk of America's deficit than in the past, while China's imbalance is much bigger.

Trump has complained Japan keeps its currency artificially low, although a Treasury Department report last week did not label Japan a currency manipulator.

However, currencies did not figure in Tuesday's talks, a Japanese government official said.