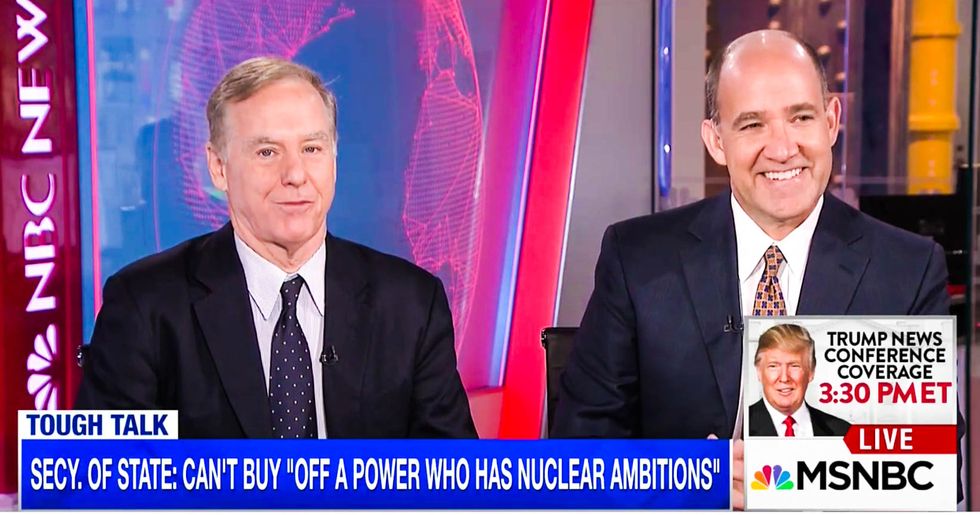 President Donald Trump has been making a lot of moves on foreign policy lately -- but an MSNBC panel on Thursday mocked him for "pretending to be tough" as a way to show his voters that his first 100 days haven't been completely ineffective.

Former Vermont Gov. Howard Dean in particular ridiculed the Trump administration's decision to stick with former President Barack Obama's nuclear deal with Iran, despite the fact that Trump called it the worst deal he'd ever seen during the 2016 presidential campaign.

In fact, Dean said that the administration's tough talk on Iran was simply a sop to Trump's base to distract them from the fact that Trump isn't actually making any major policy changes when it comes to the nuclear deal.

"I think that they're actually playing to Trump's base," he said. "There's a limit to how many crises you can have at the same time, so this is total bupkis. The thing that's bad about it is that Tillerson is a serious person. Because he's doing, essentially, a political act here for Trump, I think he's eroding his credibility as Secretary of State... Trump knows, because he's been told by his ambassador, that he has to continue this agreement. Now he has to go back to his base and pretend that he's being tough."

Republican political strategist Matthew Dowd, meanwhile, said Trump was making waves in foreign policy because he has much more control over it as president than he does over Congress.

"I think Donald Trump has figured out, after the health care fiasco, that he can make decisions in foreign policy and nobody can tell him not to," he said.