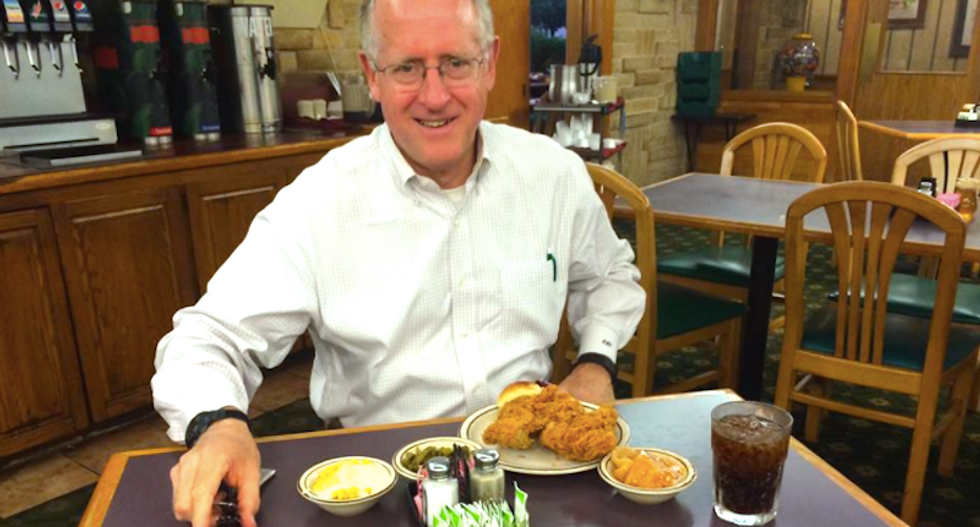 Rep. Devin Nunes (R-CA) announced Thursday morning that he would step aside as head of the House investigation into the Trump campaign's alleged ties to Russia -- but his replacement might not satisfy critics.

The chairman of the House Intelligence Committee is handing over the reins to Rep. Mike Conaway (R-TX), with assistance from Reps. Trey Gowdy (R-SC) and Tom Rooney (R-FL), while an ethics probe is conducted into his late-night visit to the White House to pick up classified documents.

The 68-year-old is most recently known for an inscrutable college football analogy during last month's House testimony by FBI Director James Comey -- and for blowing off concerns about possible Russian interference in the election.

Conaway said in January that Russian agents acting on orders by Vladimir Putin to help elect President Donald Trump were no different than Latino entertainers who appeared at campaign events for Hillary Clinton.

“Harry Reid and the Democrats brought in Mexican soap opera stars, singers and entertainers who had immense influence in those communities into Las Vegas, to entertain, get out the vote and so forth,” Conaway told the Dallas Morning News. “Those are foreign actors, foreign people, influencing the vote in Nevada. You don’t hear the Democrats screaming and saying one word about that.”

Vicente Fernández, a Mexican singer and entertainer, recorded a campaign song for Clinton and joined the California-based band Los Tigres del Norte and American-born Mexican actress Angélica María at a “fiesta” after the third debate, in Las Vegas.

Conaway -- who will now be leading the House investigation into allegations that one of his Democratic colleagues believes could land Trump associates in jail -- saw no distinction between Latino entertainers making public shows of support and Russian intelligence undertaking secret efforts to tip the U.S. election.

Conaway used a convoluted football analogy to illustrate his disagreement with the FBI director's conclusion that Putin preferred Trump over Clinton due to his longstanding grudge against the former secretary of state.

"That might work on Saturday afternoon when my wife's (Texas Tech) Red Raiders are playing the Texas Longhorns," Conaway said. "She really like the Red Raiders. But all the rest of the time -- the logic is that because he really didn't like candidate Clinton, it automatically [meant he] liked Trump. That assessment's based on what?

Comey gamely tried to play along, but eventually even Conaway seemed to get confused and move on.