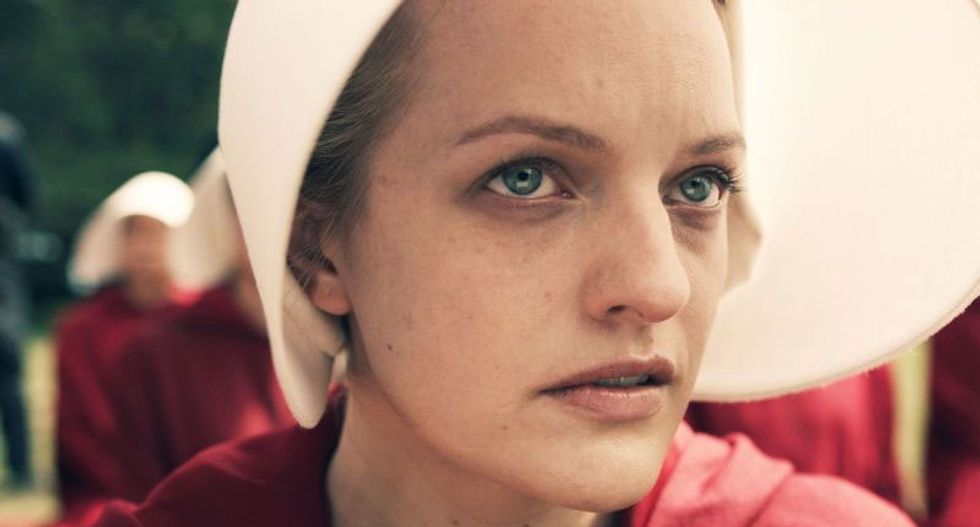 Elizabeth Moss as Offred in Hulu's upcoming adaptation of The Handmaid's Tale. (Photo courtesy of Hulu)

The Handmaid’s Tale. When they greenlit the series, producers could not have predicted the election outcome that has given many readers reason to return to books like Atwood’s, Orwell’s and Huxley’s. In fact, both 1984 and The Handmaid’s Tale have topped Amazon’s best-sellers list in recent months.

The Handmaid’s Tale arrived like an earthquake in the dialogue between faith and reason in 1985 — and since has become a curriculum staple in many women’s studies courses. In it, Atwood describes a woman’s fight to escape God-quoting oppressors who have turned America into a theocracy where women are stripped of their rights and torture is justified in the name of national security.

In this week’s New Yorker, Atwood tells writer Rebecca Mead that “she intended not just to pose the essential question of dystopian fiction — could it happen here? — but also to suggest ways that it had already happened, here or elsewhere.”

Growing up in Canada, Atwood knew members of the Polish resistance from World War II who had fled there during the war. She recalls, “I remember one person saying a very telling thing: ‘Pray you will never have occasion to be a hero.'”

Mead writes that “what does feel familiar” in rereading the book “is the blunt misogyny of the society Atwood portrays, and which Trump’s vocal repudiation of ‘political correctness’ has loosed into common parlance today.

Trump’s vilification of Hillary Clinton, Atwood believes, is more explicable when seen through the lens of the Puritan witch hunts. “You can find websites that say Hillary was actually a Satanist with demonic powers,” she said. “It is so 17th-century that you can hardly believe it. It’s right out of the subconscious — just lying there, waiting to be applied to people.”

During a 2006 interview with Bill Moyers for the Faith & Reason series, Atwood tells Bill she believes the Salem witch trials and the hysteria that erupted in that community is “one of the foundation events of American history.” She tells Mead, “The legacy of witch hunting, and the sense of shame that it engendered is an enduring American blight.”

In talking about The Handmaid’s Tale, which she likes to call speculative fiction, Atwood explains that she didn’t write it as a possible prophecy. She tells Bill, “It’s a blueprint of the kind of thing that human beings do when they’re put under a certain sort of pressure. And I made it a rule for the writing of this book that I would not put anything into it that human societies have not already done.”

Watch her conversation with Bill Moyers.

BILL MOYERS: As Margaret Atwood moved among the writers here for the PEN conference on faith and reason, naturally, the subject of fundamentalism and theocracy came up often.

BILL MOYERS: When you look back on it, was The Handmaid’s Tale true?

BILL MOYERS: I took it as a prophetic possibility —

MARGARET ATWOOD: I don’t do prophecy.

BILL MOYERS: I know you don’t.

MARGARET ATWOOD: But it’s a blueprint of the kind of thing that human beings do when they’re put under a certain sort of pressure. And I made it a rule for the writing of this book that I would not put anything into it that human societies have not already done.

BILL MOYERS: People have said when they read The Handmaid’s Tale it could never happen here. But the fact of the matter is it had happened here. Under the Puritans —

MARGARET ATWOOD: Well, the Salem witchcraft trial is in my opinion one of the foundation events of American history. And it was an event where you can call it a clash between mythology and politics if you like. Because it depended very much on a belief in the invisible world. Cotton Mather, who was a very prominent divine at the time, wrote a book called The Wonders of the Invisible World, which was all about the behavior of witches.

And the devil. And this is what people believed. They weren’t being hypocrites when they did these things. They were actually scared of witchcraft and the devil. And they believed that the devil could work his way into their community through witches, so it was serious business. But it was also a hysteria. The surprise to me has been all of the stuff I learned long ago. I thought, “Nobody’s going to be interested in this again. You know what good is knowing 17th-century theology ever going to be to me? Or anybody else. Surely nobody’s interested.” And now suddenly it’s all come back. Because things do go around in cycles.

BILL MOYERS: Seventeenth-century theology? How would you sum it up?

MARGARET ATWOOD: The argument about predestination.

BILL MOYERS: Being the elect or the not elected.

I think it’s the kind of event that replays itself throughout history when cultures come under stress. When societies come under stress these kinds of things happen. People start looking around for essentially human sacrifices. They start looking around for somebody they can blame. And they feel if only they can demolish that person, then everything’s going be okay. And it’s of course never true, but there are these periods in history. If things aren’t going well, it must be the Communists. Let’s have Joe McCarthy. You know things aren’t going well. It must be them liberals. Whoever it may be.

BILL MOYERS: Well, what The Handmaid’s Tale illustrates so vividly is that society can give up its ideals. Its freedom. Its values. In an almost frighteningly normal way.

MARGARET ATWOOD: In an almost frighteningly rapid way. Conditions change. There’s too much turmoil or fear of some kind than people can handle. And that’s the point at which they will trade their liberties for somebody who comes along and says, “I’m a strong leader. I’ll take care of it. The trains will run on time.”

BILL MOYERS: If you wanted to take over the United States government today and set up your government, how would you do it?

MARGARET ATWOOD: Well, that is more or less how. And The Handmaid’s Tale is the answer to the question. If you were going to change the United States from a democracy into a totalitarianism, how would you go about doing it? Well, you wouldn’t say, “Let’s all be communists.” You wouldn’t get any takers for that. You might say a rather twisted sort of thing that would say, “In order to preserve our freedoms we have to give them up for now.” You might say something like that. Which is kind of, I think, what’s been floating in the breeze this last little while. In order to preserve freedom we have to demolish freedom. Something like that. But you’re more likely to say, “This is the true religion. Follow our flag.” That kind of thing.

MARGARET ATWOOD: That’s exactly right. If your government says, “Not only am I your government, but I represent the true religion,” if you disagree with it you’re not just of another faction. You’re evil.

BILL MOYERS: But you don’t imagine that could happen here?

MARGARET ATWOOD: Want to bet? Want to lay some bets as to that?

BILL MOYERS: I would never bet against Margaret Atwood.

MARGARET ATWOOD: You’d have to have quite a lot of uproar first. But it’s amazing how quickly people rolled over for the Patriot Act. You know they were scared enough so that they just said, “Oh, okay. If that’s how we solve it, fine. Just don’t tell me. You know I don’t want to know. Don’t tell me.”

BILL MOYERS: Did you anticipate that you would be so vilified for suggesting in The Handmaid’s Tale that theocracy could happen in America?

MARGARET ATWOOD: Well, what has amazed me is the theocracy that I’ve put in Handmaid’s Tale never calls itself Christian. And in fact it never says anything about Christianity whatsoever. Its slogans, etc., etc., are all from the Old Testament. So what has amazed me was the rapidity with which a number of Christians put up their hands and said, “This is an insult to us.” What did it mean? It meant they hadn’t read the book. You know they hadn’t read the book.

Because in the book the regime does what all such regimes immediately do. It eliminates the opposition. The Bolsheviks got rid of their nearest ideological neighbors, the Mensheviks, as soon as they had the power. They killed the lot. You know? Too close to them. They got rid of any other socialists. They wanted to be the only true church brand of socialists. So any theocracy in this country would immediately eliminate all other competing religions if they could. So the Quakers in my book have gone underground.

MARGARET ATWOOD: And the regime is wiping out little pockets of resistant Baptists here and there. And stringing up nuns, etc. Which is exactly how they would operate, because that’s what happens under those kinds of arrangements. You want to be the power, the only power. Anybody who could be a rival power, you’d get rid of them. So I am one of those people who does believe in the America of Thoreau, for instance.

MARGARET ATWOOD: Thoreau the conscientious objector. Thoreau the man who stood upon his principles. Who refused, for instance, to pay taxes to a government that was waging a war he considered to be unjust. Went to jail for it. That is the sort of essence of the kind of American that we evolved– looked up to for many years.

BILL MOYERS: It’s also Henry David Thoreau who said, “To affect the quality of the day is the highest of the arts.”

MARGARET ATWOOD: Well, there you are. Yes.