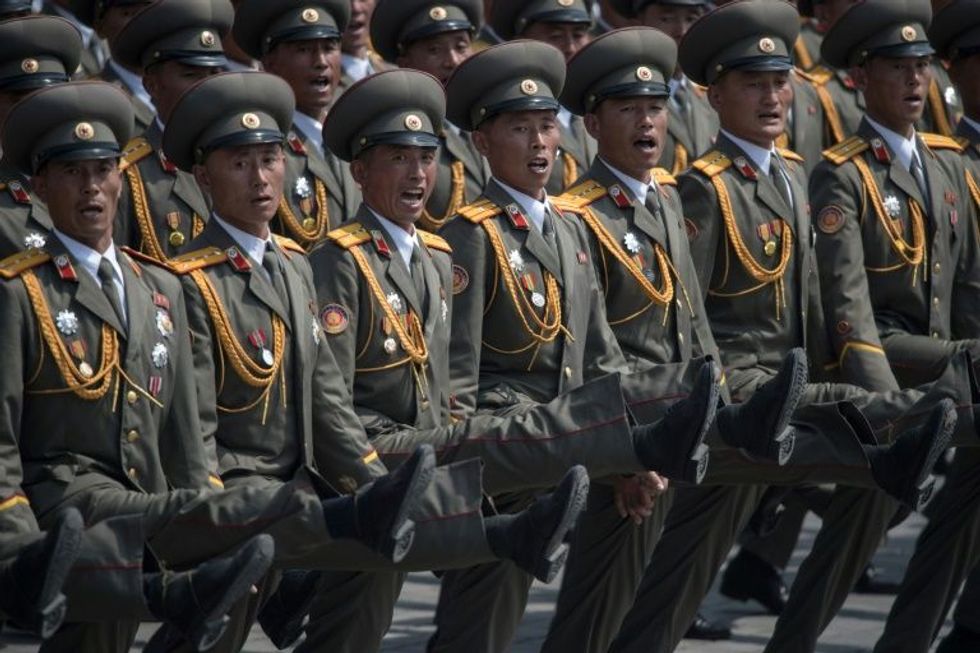 North Korea's weapons of war rolled through Pyongyang streets Saturday and it promised "nuclear justice" in response to any atomic attack as leader Kim Jong-Un mounted a spectacular show of strength.

Tensions over Pyongyang's nuclear ambitions are stretched to the limit, with US President Donald Trump deploying an aircraft carrier battle group to the region.

After a 21-gun salute, tens of thousands of soldiers, sailors and airmen goose-stepped through Kim Il-Sung Square turning their eyes towards the high balcony from where Kim watched, flanked by officers and officials.

Some detachments carried assault rifles or rocket-propelled grenades, others were equipped with night-vision goggles and daubed in face paint. One troupe was made up of sword-wielding women.

Tanks came next through the square -- named after Kim's grandfather, the North's founder -- followed by the objects of world concern.

A total of 56 missiles of 10 different types were displayed, culminating in enormous rockets on articulated trailers and on 16-wheeler vehicles.

The nuclear-armed North is under United Nations sanctions over its weapons programmes, and has ambitions to build a rocket capable of delivering a warhead to the US mainland -? something Trump has vowed "won't happen".

Ostensibly Saturday's event was to mark the 105th anniversary of Kim Il-Sung's birth -- a date known as the "Day of the Sun" in the North -- and a squadron of warplanes flew overhead forming the number.

But it was also intended to send an unmistakable message to Washington about the isolated country's military might.

Kim's close aide Choe Ryong-Hae declared that the North was a "powerful nuclear-armed state in the Orient and Asia's leader in rocketry".

It could "beat down enemies with the power of nuclear justice", he said, and was "prepared to respond to an all-out war with an all-out war.

The 1950-53 Korean War ended in an armistice rather than a peace treaty and Pyongyang says it needs nuclear weapons to defend itself against a possible US invasion.

It has carried out five nuclear tests ?- two of them last year -? and multiple missile launches, one of which saw several rockets come down in waters provocatively close to Japan last month.

Speculation that it could conduct a sixth blast in the coming days to coincide with the anniversary has reached fever pitch, with specialist US website 38North describing its Punggye-ri test site as "primed and ready" and White House officials saying military options were "already being assessed".

After dispatching the aircraft carrier USS Carl Vinson and an accompanying battle group to the Korean peninsula Trump told the Fox Business Network: "We are sending an armada."

"He is doing the wrong thing," he added

China, the North's sole major ally, and Russia have both urged restraint, with Beijing's Foreign Minister Wang Yi warning Friday that "conflict could break out at any moment".

The North is aiming its message at China as well as the US, analysts say.

Beijing's priority remains preventing any instability on its doorstep, and it has been unnerved by the sabre-rattling.

But diplomats in Pyongyang point out that the North raises its rhetoric every spring, when Washington and Seoul hold annual joint military exercises that it views as preparations for invasion.

It has not previously held a nuclear test in the month of April.

Military specialists keep a close eye on Pyongyang's parades for clues about developments in its capabilities.

The hardware displayed Saturday included what appeared to be new ICBMs or prototypes, and the Pukkuksong submarine-launched ballistic missile, which Pyongyang successfully test-fired last August, reports and analysts said.

The rockets carried on articulated trailers appeared to be longer than the North's existing KN-08 or KN-14 missiles, analysts said.

Chad O'Carroll, managing director of specialist service NK News, told AFP they could be a liquid-fuelled intercontinental ballistic missile, or an early version of one, even though Pyongyang has yet to formally announce it has an operational ICBM.

"It will be a big game-changer once it is deployed in service but they have got a long testing schedule ahead," he said.

"We'll probably see more engine tests or component tests building up eventually to an actual test of the full unit."

Pyongyang could use the parade as a show of strength in preference to a nuclear test, analysts said.

It wanted to send "a tough message to the United States in response to the Trump administration's recent rhetoric and the military steps the United States has taken", said Evans Revere of the Brookings Institution in Washington.

Another missile launch or nuclear test "can't be ruled out", he said, but the recent US cruise missile strike on Syria and Washington's tough stance "may give Pyongyang some pause".

"A parade is a highly visible but non-kinetic way of showing off capabilities," he told AFP.

Kim did not address the rally himself on Saturday, instead waving and smiling as ecstatic crowds of flag- and flower-bearing civilians -- men in suits, women in traditional hanbok dresses -- filed past him behind the military display.

"Long live!" they chanted, some in tears.