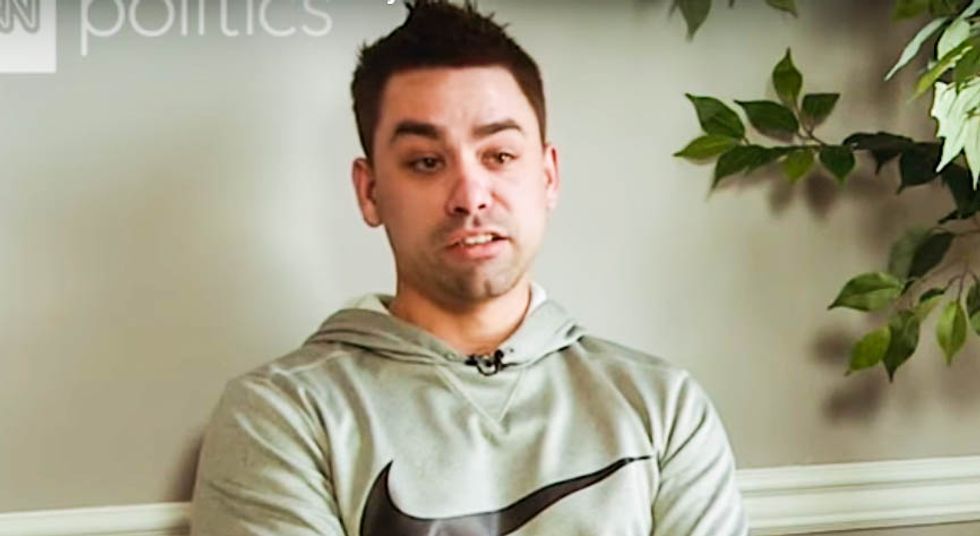 Kurt Farmer, a recovering heroin addict who is worried about losing his Medicaid coverage under the GOP health care plan (Screen cap via CNN).

During the 2016 presidential campaign, then-candidate Donald Trump vowed that he would not allow any cuts to Social Security, Medicare or Medicaid.

However, when the president endorsed the Republican Party's health care plan -- which rolled back the Medicaid expansion that went through under the Affordable Care Act -- some of the people who voted for him were caught off guard.

One such voter is Kurt Farmer, a recovering heroin addict from Pennsylvania who relies on help from Medicaid to pay for his recovery treatments.

"If I didn't have Medicaid, I wouldn't be able to pay for this," Farmer said in an interview with CNN.

Farmer said that he'd like to think he's come far enough in his recovery so that he could go without treatment -- but he doesn't trust himself to stay clean.

"I would like to say I wouldn't relapse," he explained. "But the chances are from past experience, if I'm not going to treatment, in a matter of a few weeks I start getting high."

CNN also interviewed Amanda Lasota, a recovering addict who supported Hillary Clinton, but he didn't get a chance to vote for her because she was in jail in November on drug-related charges.

Like Farmer, Lasota is getting treatment for her addiction through Medicaid, and she told CNN that the Republicans' plans for rolling back the Medicaid expansion made her fear for her ability to get help.

"I was scared to death that at the last minute, I was going to be told that I couldn't go to treatment because I'd lost my funding," she said.

These stories are particularly relevant this week after the White House floated a new policy that would let states opt out of Essential Health Benefits regulations -- including those that mandate both Medicaid and private health insurers pay for substance abuse recovery.

Watch the full interviews below.