Rep. Maxine Waters rips Trump over his hidden tax returns: I don't believe that he is paying anything 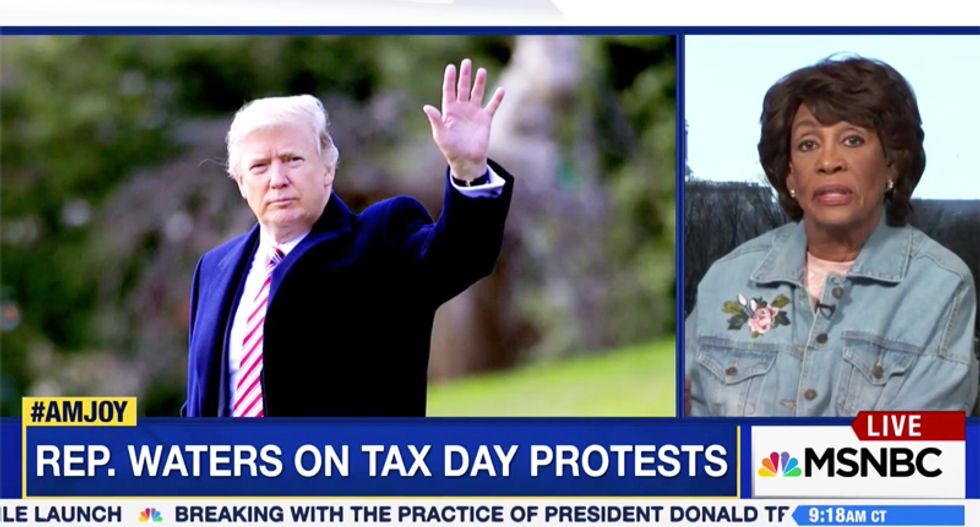 Prior to speaking at a Tax Day protests in Washington D.C., Congresswoman Maxine Waters (D-CA) stopped by AM Joy to demand that Congress force President Donald Trump reveal his tax returns to prove to Americans that he pay his fair share of taxes too.

"I do believe in the power of the people, I think it's very important for us to resist and to demand," Waters began. "He must show his taxes. Every president since Nixon has shown their taxes and I think the people have a right to know. We really need to know about Donald Trump because we are still trying to figure out all of his business entanglements and his conflicts of interest, and so he has not answered many questions."

"Even though we thought he had placed all his businesses in trust, we find that has not happened," she continued. "So people all over this country are filling out their taxes, they are trying to do the right thing. You know, middle class people are paying 30, 35 percent in taxes and some of us believe that Donald Trump is not paying any taxes. He's taken advantage of all the loopholes, he knows all of the tricks. We need to know what it looks like, who he owes, what kind of debt he has."

Waters went on to note that Congress has the power to compel Trump to release his tax returns, but added Republicans are, "still trying to be in the favor of this president."

The lawmaker then went on to link Trump's reluctance to release all of his financial information to his involvement with Russian banks.

"I don't want the president of the United States to be compromised in any way," she explained. "We don't know who he owes and how much he owes. There's all the rumors about having borrowed money from Russia during 2008 crisis because many of the major banks in this country would not lend him any money because of the debt he had incurred and the bankruptcies he had filed. So we cannot have a president who can be blackmailed."