Russia expert: Putin has something on Trump and will use it on him now that he is no good to him 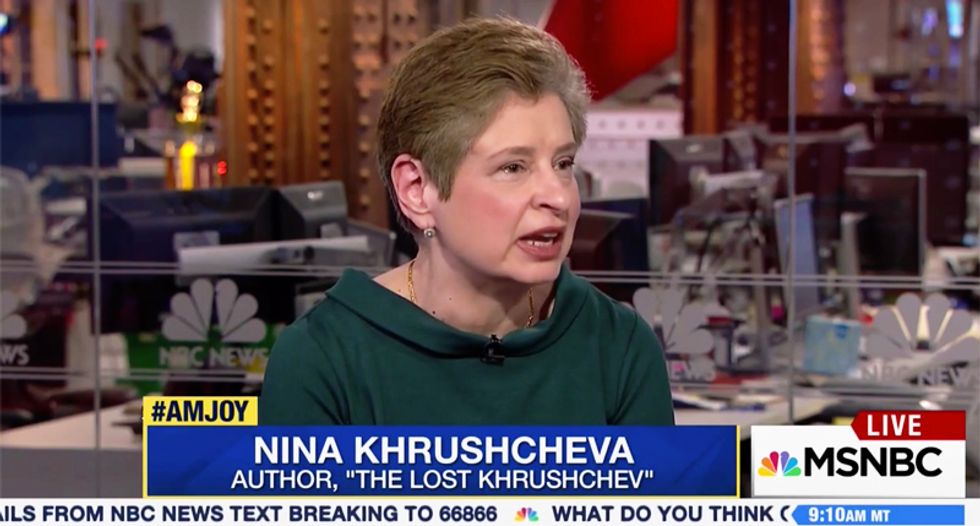 Appearing on AM Joy an expert on Russian policy said that Russian President Vladimir Putin gambled on an erratic Donald Trump becoming president and will soon turn on him because he's is no longer useful.

According to Nina Khrushcheva, who teaches at the New School and is the director of the Russia Project at the World Policy Institute, the relationship between Putin and President Trump hasn't so much deteriorated as much as Putin is "pragmatically" moving on.

"Where do you see this relationship going?" Reid asked. "It feels like it's deteriorating or perhaps destined to deteriorate. What do you make of it?"

"Well, I actually never thought that it's going to go anywhere," Khrushcheva parried, "In fact, I actually wrote last summer that Putin is a pragmatic politician. He cannot possibly not think that the disaster of Donald Trump is going to work wonders for him. He could have hoped, he thought he could manipulate it, he used it for as long as he could have. But now the reality, as I said, has kicked in."

Addressing the recent meeting between Putin and Secretary of State Rex Tillerson where Tillerson was unable to set up a meeting between Trump and the Russian president, Khrushcheva indicated that this was a sure sign of where the relationship is headed.

"As much as the Russians want to have a relationship with the United States, they are clearly understanding that the longer that meeting doesn't happen, the more Putin would actually return to his own devices," Khrushcheva explained. "And that is a big, big danger."

"Very quickly," Reid interrupted. "The fear that a lot of Americans have is the sort of underlying undercurrent, that there is some retaliation that regime might use because it might have something on Donald Trump."

"I'm certain," Khrushcheva responded. "Because Putin, I keep saying on this show, he is an equal opportunity offender. If he had Hillary Clinton -- then he certainly would have something on Trump and they will be very willing to act on it in an act of cyber-war, as Malcolm Nance always reminds me. That would be very dangerous and then can really can turn this relationship into the stage it is in."