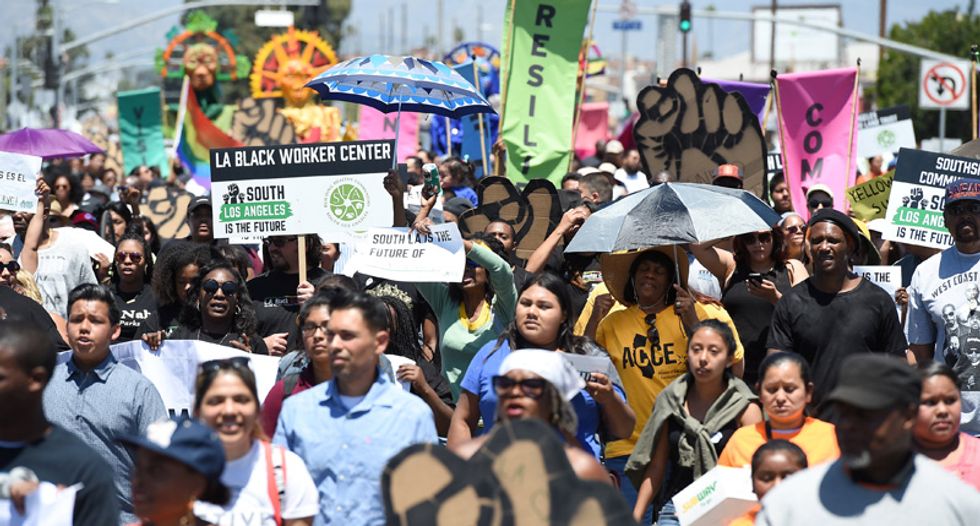 Protesters march from the intersection of Florence and Normandie Avenue, the flashpoint where the riots started 25 years ago, to a nearby park for a rally to remember and honor the victims of the 1992 Los Angeles riots in Los Angeles, California, U.S., April 29, 2017. REUTERS/Kevork Djansezian

A sea of protesters swarmed in front of the White House on Saturday to voice displeasure with President Donald Trump's stance on the environment and demand that he rethink plans to reverse the climate change policies backed by his predecessor.

The Peoples Climate March, the culmination of a string of Earth Week protests that began with last Saturday's March for Science, coincides with Trump's 100th day in office, the end of the traditional "honeymoon" period for a new president.

As temperatures rose above 90 degrees Fahrenheit under hazy skies in the nation's capital, tens of thousands of people marched from the grounds of the U.S. Capitol and passed the White House en route to the Washington Monument for a rally.

Many of the protesters carried signs with slogans such as "The seas are rising and so are we" and "Don't be a fossil fool." As the procession passed the Trump International Hotel on Pennsylvania Avenue, marchers booed and chanted "shame."

“Enjoy the day, enjoy the weather,” Trump, speaking to reporters ahead of a rally in Harrisburg, Pennsylvania commemorating his 100th day in office said when asked what he would tell those rallying on climate change.

While a good-natured mood prevailed and there were no signs of violence, many demonstrators said they were angered by the prospect of Trump carrying through on his vow to roll back protections put in place by his predecessor, Democrat Barack Obama.

Trump's administration is considering withdrawing from the Paris Agreement, which more than 190 countries including the United States signed in hopes of curbing global warming. Trump has also proposed deep cuts for the Environmental Protection Agency and the elimination of many environmental regulations.

In his campaign, Trump called climate change a hoax. Last month he kept a promise to the coal industry by undoing climate-change rules put in place by Obama.

Tom McGettrick, 57, an electrical engineer who drove up from the Florida Keys to attend the march, said his main concern is the weakening of the EPA.

"Forty years of environmental protection has done wonders for the environment, especially in the Midwest," said McGettrick, who spent most of his life in Michigan.

"When I was a teenager and went to Lake Erie, it was one of the most polluted bodies of water in the country," he said. "Now when you go to Lake Erie it's really beautiful."

The Washington event, which coincided with Trump's 100-day milestone, followed an exclusive interview with Reuters in which the president reflected wistfully on his life as a billionaire real estate developer that he left behind after his Jan. 20 inauguration.

"This is more work than in my previous life," Trump told Reuters. "I thought it would be easier."

Saturday's march was part of an effort to build support for candidates with strong environmental records in the run-up to next year's midterm elections and the 2020 presidential race, organizers said.

"We're using this as a tactic to advance the strategy of building enough power to win on climate over the course of the long haul," said Paul Getsos, national coordinator for the Peoples Climate Movement. Sponsors of Saturday's events include labor unions, the Sierra Club and civil rights groups.

As a side theme, marchers will protest Trump's crackdown on illegal immigrants and other issues he has championed.

Since Trump's inauguration, there have been national protests focused on issues ranging from abortion rights to immigration and science policy.

Myron Ebell, a climate change skeptic at the Competitive Enterprise Institute, a libertarian think tank, said the march would have little impact on the administration.

"The real decisions are made in this country in elections, and we have now a president and a House and a Senate that are determined to pursue a pro-energy agenda," he said by telephone.

Environmental activists believe public opinion is on their side. A Gallup poll this month showed 59 percent of Americans agreed environmental protection should take priority over increased U.S. energy production.

Dozens of "sister" marches are planned for other North America locales, from Annapolis Royal, Nova Scotia, to Dutch Harbor in Alaska's Aleutian Islands. Overseas, about three dozen events range from a protest in Vienna to a tree-planting event in Zambia.