Seth Meyers on Trump's NAFTA retreat: 'This isn't the first time Trump has had to pull out because of soft wood' 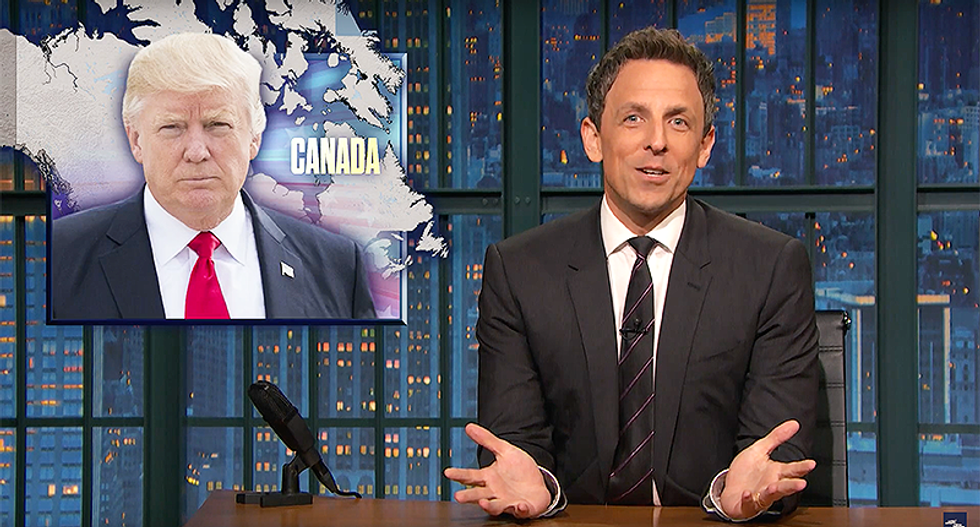 According to Seth Meyers, all of the jokes made before the 2016 election have suddenly become true.

"If we elect Trump we're going to end up fighting with Canada! Ha!" Meyers guffawed.

The only problem is that it almost came true. This week Donald Trump threatened to make good on his campaign promise to kill NAFTA. The move prompted a series of discussions in the news about "softwood lumber" and dairy prices.

Meyers swore that he would not use this opportunity to make a lot of penis jokes. "I'm just saying that Donald Trump does not want to be slapped with soft-Canadian wood so he's clamping down on it."

Trump's Secretary of Commerce claimed that Canada was artificially driving down the cost of soft wood by subsidizing the industry. He called the official term for the tactic "stumpage."

"This is all very confusing for Trump because 'stumpage' is his nickname for Donald Jr," Meyers joked.

But the real kicker came from Trump's phone call with the leaders of both Canada and Mexico, in which he was convinced to spin 180 degrees on his NAFTA promise.

"Something tells me this isn't the first time Trump has had to pull out because of soft wood," Meyers joked.