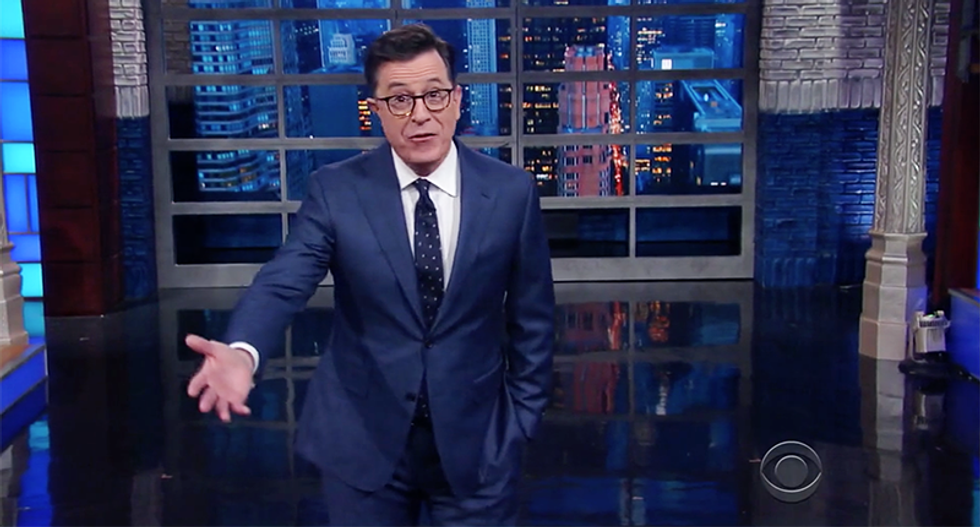 Alex Jones called out Stephen Colbert during his testimony in divorce court this week, claiming Colbert "was making fun of me the other day, but he doesn't take that home to his kids." Jones was talking about the allegation that his "character" he plays as part of his job harms his children.

Colbert continued his mockery of Jones Friday night when he admitted that his wife won't allow him into the house after he talks about Alex Jones unless he delouses himself and burns his clothes.

Playing a clip of Jones, Colbert showed off the "furious hardboiled egg" talking about the diarrhea running down George Washington's leg while he marched into battle.

"That's who we come from! And then we let all these hunchback scum rule us? I will never submit to you! And the human spirit is rising! You will not turn us into animals!" Jones screamed into the camera, sucking in air and gnarling his teeth.

"Yes, you can't turn Alex into an animal because he's already a rabid badger," Colbert said.

Colbert turned to mock Jones' admission of drug use. Jones explained away his occasional drug use by saying that he smokes it nearly yearly "to monitor it's strength -- which is how law enforcement does it."

"Yes! Everyone remembers that one 'Law and Order' episode every year where the detectives burn down the dank bud then sit on the couch with a bunch of snacks and binge-watch 'Law and Order," Colbert said. "It's pretty trippy."

Reigniting his new character Tuck Buckford, Colbert launched his latest episode of the "Brain Report" in which he alleged Benjamin Franklin had irritable bowl syndrome -- which exploded all over his kite. It eventually lead to the creation of the moist towellette. Buckford then proceeds to smoke from a water bong and devolve into a conversation about zebra steaks and crack, which he sprinkles over his "meat."