Syria's Assad: Chemical attack '100 percent fabrication' -- were those children 'dead at all?' 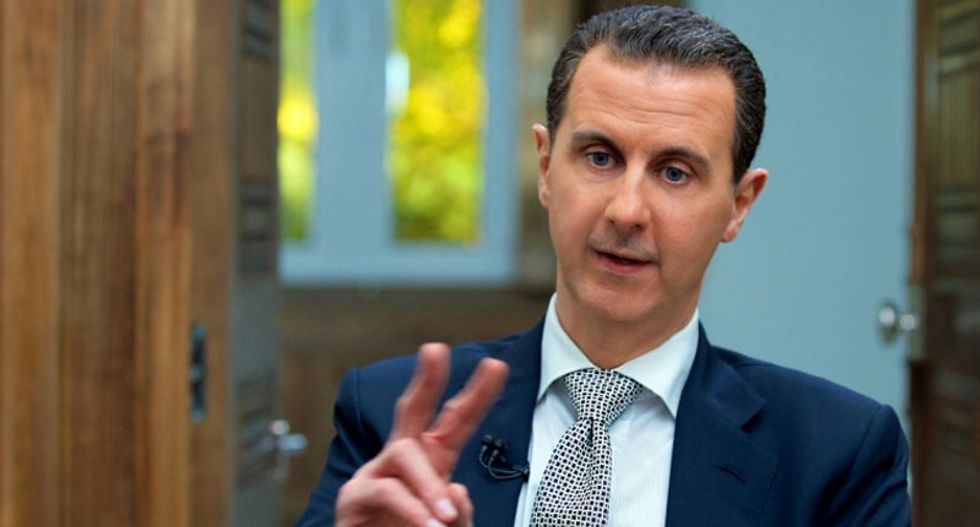 Syria's President Bashar al-Assad said a suspected chemical weapons attack was a "fabrication" to justify a US strike on his forces, in an exclusive interview with AFP in Damascus.

The embattled leader, whose country has been ravaged by six years of war, said his firepower had not been affected by the attack ordered by US President Donald Trump, but acknowledged further strikes were possible.

Assad insisted his forces had turned over all their chemical weapons stocks years ago and would never use the banned arms.

The interview on Wednesday was his first since a suspected chemical weapons attack that killed dozens of civilians in the rebel-held town of Khan Sheikhun.

"Definitely, 100 percent for us, it's fabrication," he said of the incident.

"Our impression is that the West, mainly the United States, is hand-in-glove with the terrorists. They fabricated the whole story in order to have a pretext for the attack," added Assad, who has been in power for 17 years.

At least 87 people, including 31 children, were killed in the alleged attack, according to the Britain-based Syrian Observatory for Human Rights monitor.

But Assad said evidence came only from "a branch of Al-Qaeda," referring to a former jihadist affiliate that is among the groups that control Idlib province, where Khan Sheikhun is located.

Images of the aftermath, showing victims convulsing and foaming at the mouth, sent shockwaves around the world.

But Assad insisted it was "not clear whether it happened or not, because how can you verify a video? You have a lot of fake videos now."

"We don't know whether those dead children were killed in Khan Sheikhun. Were they dead at all?"

He said Khan Sheikhun had no strategic value and was not currently a battle front.

"This story is not convincing by any means."

The Organisation for the Prohibition of Chemical Weapons (OPCW) has begun an investigation into the alleged attack, but Russia on Wednesday blocked a UN Security Council resolution demanding Syria cooperate with the probe.

And Assad said he could "only allow any investigation when it's impartial, when we make sure that unbiased countries will participate in this delegation in order to make sure that they won't use it for politicised purposes."

He insisted several times that his forces had turned over all chemical weapons stockpiles in 2013, under a deal brokered by Russia to avoid threatened US military action.

"There was no order to make any attack, we don't have any chemical weapons, we gave up our arsenal a few years ago," he said.

"Even if we have them, we wouldn't use them, and we have never used our chemical arsenal in our history."

The OPCW has blamed Assad's government for at least two attacks in 2014 and 2015 involving the use of chlorine.

The Khan Sheikhun incident prompted the first direct US military action against Assad's government since the war began, with 59 cruise missiles hitting the Shayrat airbase three days after the suspected chemical attack.

Assad said more US attacks "could happen anytime, anywhere, not only in Syria."

But he said his forces had not been diminished by the US strike.

"Our firepower, our ability to attack the terrorists hasn't been affected by this strike."