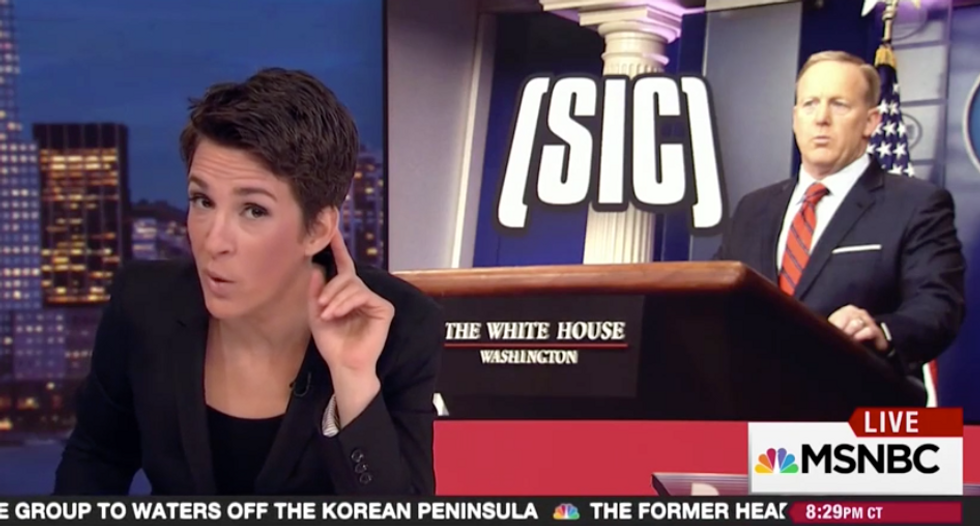 Starting with Spicer’s inability to correctly pronounce Australian Prime Minister Malcolm Turnbull’s name, Maddow argued, “from the very beginning, it was clear the White House press secretary could not handle this”

“Literally acronyms are hard,” Maddow added, noting Spicer frequently refers to the acronym for the “Presidential Daily Briefing” (PDB) as “P-B-D.” As the MSNBC host noted, Spicer also misrepresents events, like when he discussed the “terror attack in Atlanta,” presumably referring to the Pulse nightclub attack which occurred in Orlando.

She then turned to Spicer’s assertion at Tuesday’s press briefing that Adolf Hitler “didn’t even sink” to using chemical weapons against his own people, as did Syrian dictator Bashar al-Assad.

“This isn’t just mispronouncing somebody,” Maddow said. “This is the full-blown blossoming of something that appears to be a thought.”

Arguing even “seven year-olds know that history,” Maddow needled Spicer’s mispronunciation of Bashar al-Assad’s name—something CNN host Wolf Blitzer corrected him on Tuesday afternoon when he appeared on “The Situation Room” to apologize for his Holocaust comparison.

“Talking is hard, everybody gets tripped up sometimes,” the host conceded. “But this is the person whose job it is to speak for the White House.”

Maddow referenced Spicer’s three separate written clarifications “in nineteen minutes,” the first two of which featured Spicer assuring that he was not comparing Hitler to al-Assad, before following that claim with “however.”

“Talking is hard,” Maddow said. But, she repeated, “why is [Spicer] doing it?”

Watch the takedown below, via MSNBC: