Ted Lieu: No vote on Gorsuch or other Trump nominees until we know whether presidency is legitimate 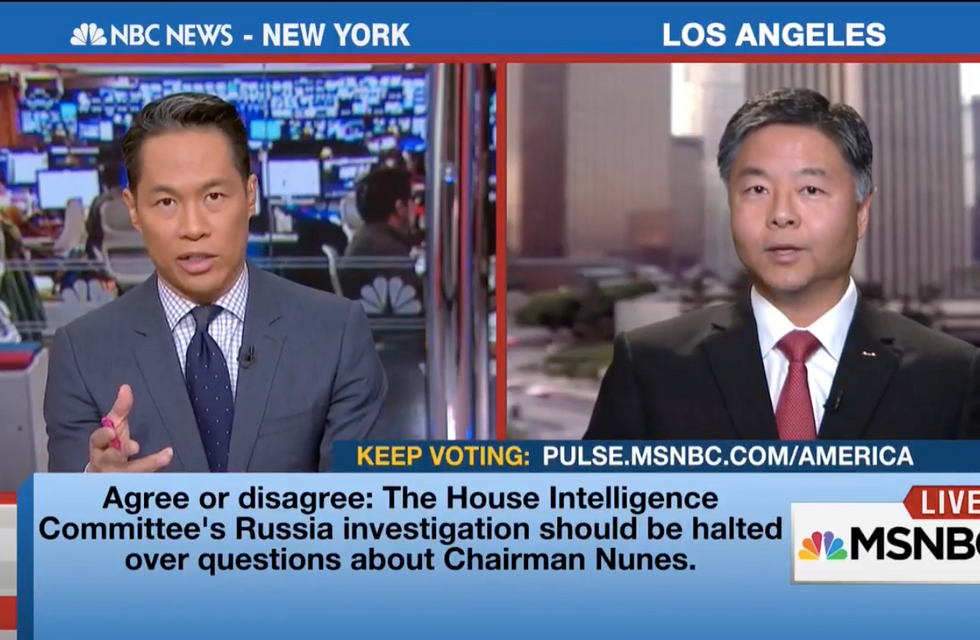 Democratic U.S. Rep. Ted Lieu (CA) lit into President Donald Trump on Sunday, questioning the legitimacy of his presidency and calling for a halt on the nomination of Supreme Court hopeful Neil Gorsuch.

In a discussion with MSNBC Live anchor Richard Lui, Lieu said that House Intelligence Committee Chairman Rep. Devin Nunes needs to step down and pointed out that Pres. Trump can declassify the intelligence documents that the committee is viewing at any time.

"The president himself can declassify these documents," Lieu said. "If Trump has nothing to hide he can show the American people what's going on."

The question of Russian interference in the 2016 election, Lieu said, calls into question the legitimacy of the Trump presidency.

"Let's take a step back and consider how shocking it is that the president's associates and maybe the president himself is under investigation by the FBI for possible collusion with Russia," Lieu said. "At stake is the legitimacy of the Trump administration. There needs to be a pause of what's going on. Congress should not be voting on Supreme Court and lifetime appointments or on major tax reform."

On Sunday, Trump tweeted that the House and Senate Intelligence investigation into his ties to Russia are pointless and that former Pres. Obama's alleged surveillance of Trump Towers is the real scandal.

Lieu responded by reiterating that the federal government only surveils two kinds of people, foreign agents and criminals.