'That’s a total cuck move': Stephen Colbert destroys Steve Bannon for getting kicked off the NSC 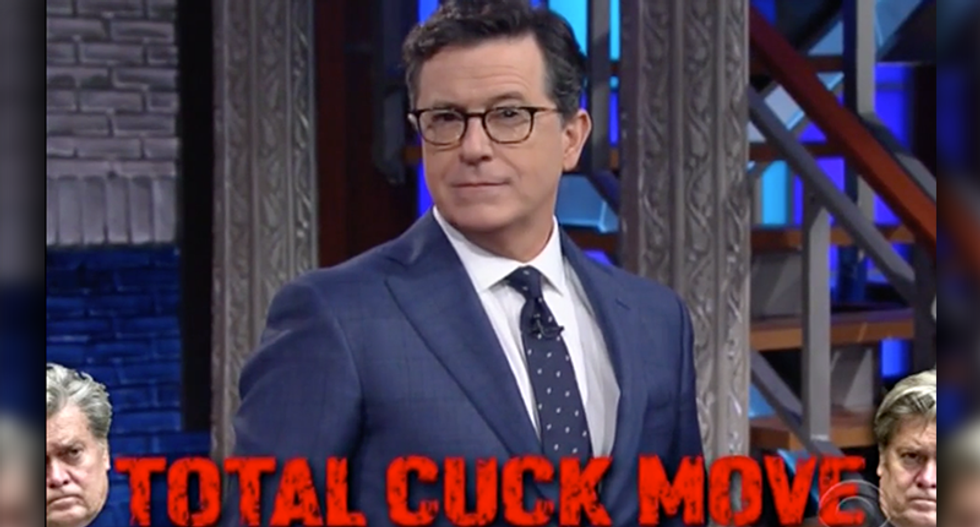 The Late Show host began by discussing news that Devin Nunes—the former head of the House Intelligence Committee’s probe into Russia’s influence in the 2016 presidential election—resigned following allegations of impropriety.

Colbert noted that with the departure of Nunes—“guy who once looked at a magic eye poster and can’t step out of it”—an entirely different person “will be covering Trump’s ass.”

The Late Show host then turned his attention to the Senate filibuster of Neil Gorsuch, playing a vintage (two day old) video of “maverick” John McCain blasting anybody willing change Senate rules as "a stupid idiot."

“You have to be pretty dumb to have John McCain call you a stupid idiot, because he thought Sarah Palin could be president,” Colbert joked. “McCain voted for the nuclear option. In the words of an a American hero, 'You’re a stupid idiot.'"

“Speaking of stupid idiots…” Colbert said, before turning his attention to Donald Trump. "You’ve had your Big Mac now get to work, Little Donny," Colbert joked. “It’s salty, it’s got the special sauce. And oddly, sesame seeds,” he added.

“No matter what you say to Donald Trump, he only remembers he good words,” Colbert said. But, the Late Show host noted, it's not just "good words" floating around the White House. Referring to reports that Bannon used derogatory language to describe Trump's son-in-law, Kushner, Colbert pointed out, “Bannon calls him a cuck.”