'They're not yelling Trump — they're yelling help': Jake Tapper says much of US had 'a rough 100 days' 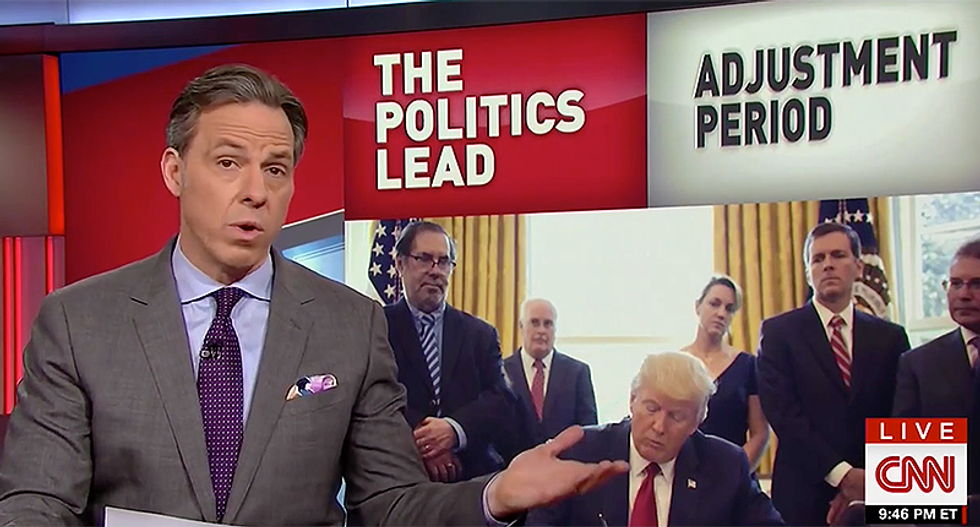 President Donald Trump revealed he thought the job as president would be a lot easier than he anticipated. He claims his first 100 days have been difficult and he seems to be growing wary of the logjam in Congress. But CNN's Jake Tapper put things in perspective Friday night when he told Trump that there are plenty of Americans who are worse off.

"The notion that President Trump thought the job of president of the United States of America -- that that job would be easier than hosting 'Celebrity Apprentice' and running the Trump business empire -- that's pretty stunning," Tapper said.

Tapper argued that there are "many Americans who have had a much tougher 100 days of the Trump administration."

He specifically cited Craig Moss, who lost his son to the opioid crisis in 2014. Moss thought Trump was going to help make things better. Emmanuel Ayala Frutos was a DREAMer brought to the United States by his parents at just six years old. Trump claimed that he has sympathy for the DREAMers but he was held in detention for 19 days. He's just as terrified as other immigrants.

There are coal miners who were given false hopes that their jobs would come back. Elderly people and cancer patients who were told Trump would renegotiate prescription drug prices. Trump's first 100 days are hung on a timeline of broken promises and angry tweets.

"These Americans are depending on you, Mr. President," Tapper closed. "They're depending on you to honor the promises you made to them. They are who this is all about. I know you like the cheers at your rallies. If you listen more closely, they're not yelling 'Trump.' They're yelling, 'help.' These are the people who have really had a rough 100 days."

'They're not yelling Trump — they're yelling... by sarahburris