'This regime should be ousted': Turkey says US strike in Syria not enough 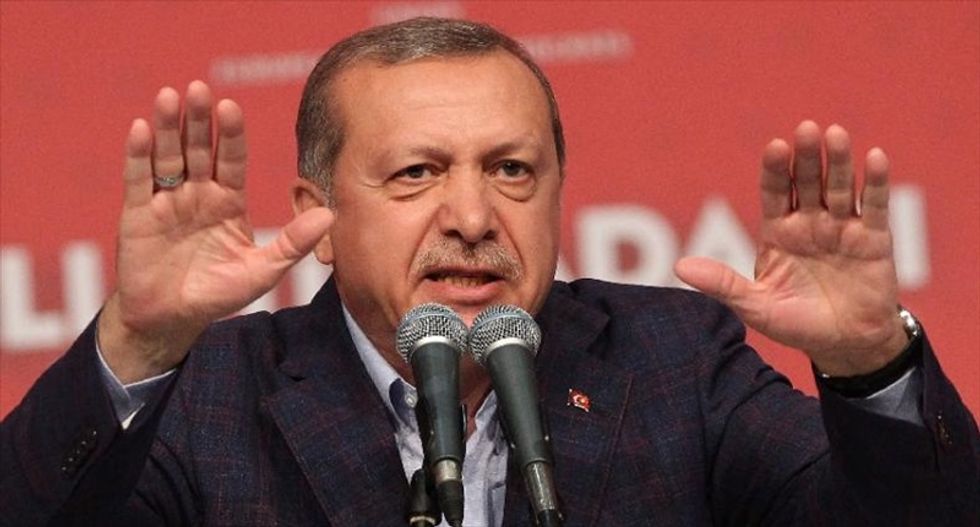 Turkish President Recep Tayyip Erdogan on Friday welcomed the US strike on an airbase of the Syrian regime but said it was not enough and more action was needed.

"I want to say that I welcome this concrete step as positive," Erdogan, a longtime foe of President Bashar al-Assad, said in a rally in the southern city of Antakya just north of the Syrian border.

"Is it enough? I don't see this as enough... the time has come for steps for a serious result to protect the oppressed Syrian people," he added.

US President Donald Trump ordered the missile strike in retaliation for the suspected chemical weapons attack in the town of Khan Sheikhun in northwestern Syria's Idlib province that killed dozens and was blamed by many world leaders on Assad.

Erdogan reaffirmed his past calls that international community needed to impose a safe zone in northern Syria -- which Ankara has said should be backed by a no-fly zone -- to ensure security in the area.

"We again say how important it is for a terror-free safe zone to be created," he told thousands of supporters in the city.

He added: "I want to state something clearly: while children are being massacred in this world, no one has the right to feel themselves safe or in peace."

Hours before the military strike took place, Erdogan had called on Trump in a television interview to back up his harsher rhetoric against Assad with actions, telling his US counterpart "don't limit yourself to comments".

Erdogan's spokesman Ibrahim Kalin earlier said the strike against the Sharyat airbase in Homs, northern Syria, was "a positive response" to the "war crimes" of the regime of Assad.

Turkish Foreign Minister Mevlut Cavusoglu meanwhile said safe zones in Syria were "now important more than ever" and said Assad needed to be ousted from power.

"This regime should be ousted from leading Syria at once. The best way to do this is to start a transition process as soon as possible," said Cavusoglu.

"We need to establish a transition government."

There were protests outside the Russian and Iranian embassies in Ankara on Friday, with hundreds of demonstrators carrying 100 black coffins with images of children killed in Tuesday's attack in Idlib, an AFP photographer said.

The coffins had "murderer Assad" and "tyrant Putin" written on them.

Dozens of the victims were treated in Turkey and the Turkish health ministry on Thursday said initial analysis suggested victims were exposed to the deadly nerve agent sarin.