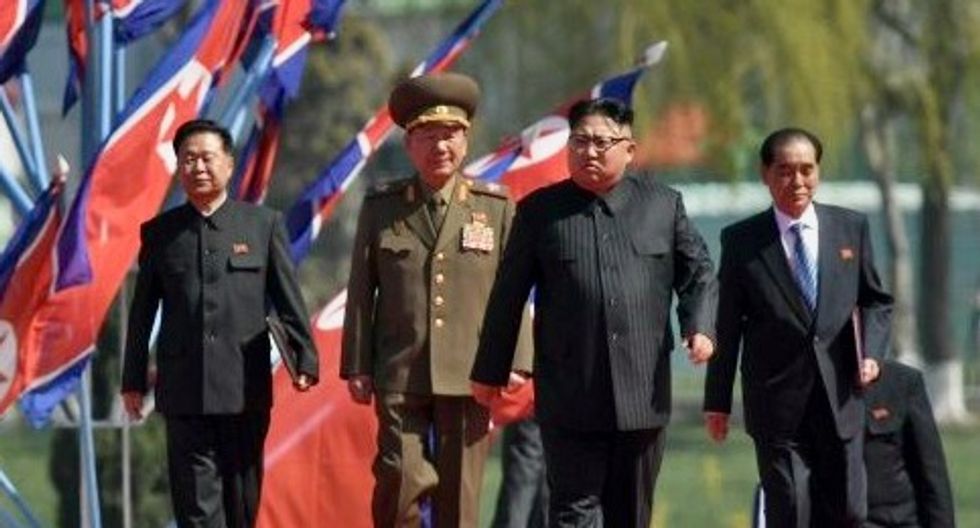 North Korea's military forces were massed in Pyongyang early Saturday for a show of strength by leader Kim Jong-Un as tensions mount over his nuclear ambitions.

Hundreds of flatbed trucks packed with soldiers lined the banks of the Taedong river in the predawn darkness for a parade through the North Korean capital.

Ostensibly the event was to mark the 105th anniversary of the birth of Kim's grandfather, the North's founder Kim Il-Sung ? a date known as the 'Day of the Sun' in the Democratic People's Republic of Korea, the country's official name.

But it is also intended to send an unmistakable message to Washington, Seoul, Tokyo and other capitals about the isolated, nuclear-armed North's military might.

Pyongyang is under multiple sets of United Nations sanctions over its atomic and ballistic missile programmes, and has ambitions to build a rocket capable of delivering a warhead to the US mainland ? something US President Donald Trump has vowed "won't happen".

It has carried out five nuclear tests ? two of them last year ? and multiple missile launches, one of which saw three rockets come down in waters provocatively close to Japan last month.

Speculation that it could conduct a sixth blast in the coming days to coincide with the anniversary has reached fever pitch, with specialist US website 38North describing its Punggye-ri test site as "primed and ready" and White House officials saying military options were "already being assessed".

Trump has dispatched the aircraft carrier USS Carl Vinson and an accompanying battle group to the Korean peninsula.

"We are sending an armada. Very powerful," Trump told the Fox Business Network. "He is doing the wrong thing," he added of Kim. "He's making a big mistake."

China, the North's sole major ally, and Russia have both urged restraint, with Beijing's foreign minister Wang Yi warning Friday that "conflict could break out at any moment".

The North has reiterated its constant refrain that it is ready for "war" with the US.

Its army vowed Friday a 'merciless' response to any US provocation but diplomats in Pyongyang are more sanguine, pointing out that the North raises its rhetoric every spring, when Washington and Seoul hold annual joint exercises that it views as preparations for invasion.

None of the North's five previous nuclear tests have taken place in the month of April.