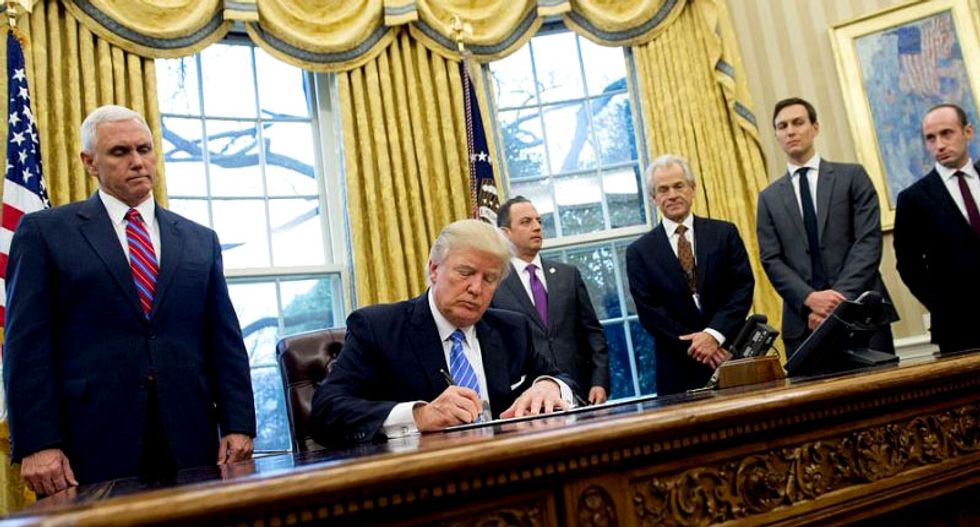 Not much about Donald Trump's administration has followed presidential tradition, and here's another example: it is asking the American people what government departments and agencies they would like to see reformed or even axed.

Options include the CIA, the State Department, the Department of Homeland Security, and even the Executive Office of the President.

A website created by the Director of the Office of Management and Budget (itself among the choices) allows people to make suggestions as Trump moves to make good on a pledge to streamline a bureaucracy he derides as bloated and inefficient.

A questionnaire on the White House website lists 20 departments or agencies of the US federal government and more than 100 offices within them.

Above this menu is the question, "What agency would you like to reform?"

Further down is the question "What agency would you like to eliminate?" and then a menu for people to give a reason.

The options include the idea that such and such an office is not necessary, duplicates the work of another or should not be the work of the federal government in the first place. People can also write in their own reasons.

Reorganizing the government was one of Trump's main campaign pledges.

In a video that features on this web page, Mick Mulvaney, director of the Office of Management and Budget reaches out to people with "any experience with the federal government, if you've had good stories, or bad stories about how the federal government has served or failed to serve you."

"President Trump calls it draining the swamp," he said, adding "and we can't do that without your help."

After taking power, Trump imposed a temporary hiring freeze on the federal government. It was replaced this week by what Mulvaney calls a more strategic plan that does a staffing analysis department by department.

Over the next 11 months the administration wants to carry out a complete overhaul of federal departments and agencies, for example by merging some.

"This is really a blank sheet of paper," Mulvaney told a news conference on Tuesday.