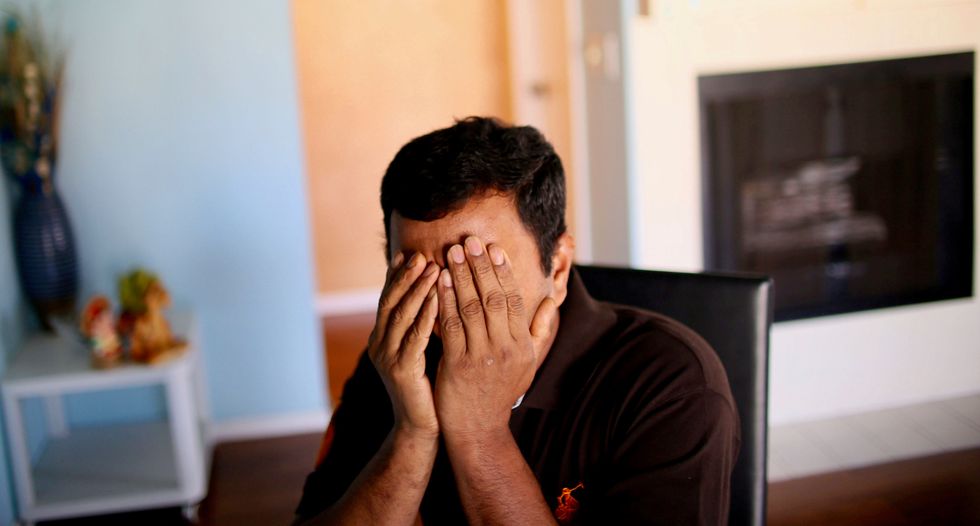 When Raj, a Sri Lankan fisherman, sought refuge in the United States in 2005, he had precisely the kind of fear of returning home that U.S. asylum laws require.

In 2004, he was kidnapped by the separatist rebel group the Tamil Tigers and had to pay $500 to secure his release, according to Raj, his lawyer and court records reviewed by Reuters. The group then demanded more money, which he could not pay after a tsunami destroyed his house and fishing boat.

Raj, 42, who asked that only his first name be used because of the sensitive nature of his situation, decided to flee. He boarded a plane using a false Canadian passport and requested asylum upon arriving in the United States.

There was a catch, however. U.S. laws ban immigration by anyone who has provided "material support" to terrorists, and the Tamil Tigers are designated as a terrorist group by the United States. A judge ruled that Raj's ransom payment to them constituted material support. (Read an excerpt of the letter petitioning the U.S. government for a waiver in this case: http://tmsnrt.rs/2oPsqQM)

Ultimately, Raj was granted asylum in 2011 because of rules that allow for waivers for people who provided aid to terrorists under duress. He now lives in San Diego, California, works in an Indian restaurant and hopes to become a citizen. (Read an excerpt of the letter from the U.S. government granting the waiver: http://tmsnrt.rs/2oPy7yx)

Raj said it was "a big relief" when he finally received his green card around a year after receiving asylum. "I am not a terrorist," he said.

Now the Trump administration is debating whether to rescind the waivers that have allowed Raj, and tens of thousands of others, to immigrate to the United States in the past decade (See graphic on waivers: http://tmsnrt.rs/2oPssIo). Some immigration hardliners are concerned the exemptions could allow terrorists to slip into the country.

U.S. President Donald Trump directed the secretaries of State and Homeland Security, in consultation with the attorney general, to consider abolishing the waivers in an executive order in March. That directive was overshadowed by the same order's temporary ban on all refugees and on travelers from six mostly Muslim nations.

The bans on refugees and travel were challenged in lawsuits, and their implementation has been suspended pending full hearings in court. But the waiver review was not included in the court rulings, so that part of the order remains in effect.

Rules governing the waivers have been hammered out over the last decade with both Democratic and Republican support. But in recent years they have drawn fire from some conservative lawmakers, including Attorney General Jeff Sessions when he was a senator.

A State Department official said this week the department is working with DHS to review the waivers and is "looking at actually pulling them back in accordance with the executive order."

The official, who spoke on condition of anonymity, declined to give details on the timing of the review or its likely outcome. The Department of Justice declined to comment.

Following the Sept. 11, 2001 attacks, Congress expanded the definition of who could be considered a terrorist and what constituted “material support” to terrorism in rules now known as the Terrorism Related Inadmissibility Grounds.

Those changes ensnared people like Raj who were coerced or inadvertently provided support to terrorists, as well as members of persecuted ethnic groups that supported rebel organizations, and even U.S.-allied groups fighting against authoritarian regimes.

Without an exemption, members of Kurdish groups that battled Saddam Hussein's forces in Iraq, Hmong groups who fought alongside U.S. troops in Vietnam, or some Cubans who fought Fidel Castro’s regime would not be allowed to immigrate to the United States.

Under the exemptions, U.S. authorities have the discretion to grant people residency in the United States after they have passed background checks and are found to pose no threat to national security.

Congress initially passed waivers to the terrorism bars in 2007 with bipartisan support, and in the years that followed both the Bush and Obama administrations added additional groups and circumstances to the exemptions.

U.S. Citizenship and Immigration Services (USCIS) has granted nearly 22,000 TRIG exemptions in total over the last decade, according to the latest data available, which goes through September 2016. The State Department also grants TRIG exemptions, but a spokesman could not provide data on how many.

Refugees from Myanmar are the largest single group of beneficiaries to date of TRIG exemptions granted by USCIS, with more than 6,700 waivers.

The wave of Myanmar refugees dates to 2006, when U.S. Secretary of State Condoleezza Rice ruled that thousands of members of the Karen ethnic group, then living in a camp in Thailand, could resettle in the United States, even if they had supported the political wing of an armed group that had fought the country's military regime.

One high-profile supporter of scrapping the waivers is House of Representatives Judiciary Committee Chairman Bob Goodlatte, a Republican from Virginia whose staffers were instrumental in drafting Trump's travel ban. Goodlatte told Reuters he was "pleased that the Trump Administration is reviewing the dangerous policy."

"I personally don't think that a bureaucrat should be deciding how much support for terrorism is enough to be barred," she said.

A USCIS spokeswoman, when asked if a recipient of an exemption had ever been involved in a terrorism-related case after arriving in the United States, referred Reuters to the Federal Bureau of Investigation, which said it was a question for the State Department to answer.

“I don’t know of any cases where beneficiaries of exemptions have gotten into trouble after arriving,” the State Department official said, noting that the department does not typically track people after they arrive in the United States.

Trump's order to review the waivers "is another example of an attempt to address a non-existent phantom problem," said Eric Schwartz, who served in the State Department during the Obama administration.

Schwartz and immigration advocates say the waivers are granted after lengthy review and are extremely difficult to get.

"These are case-by-case exemptions for people who represent no threat to the United States but rather have been caught in the most unfortunate of circumstances," said Schwartz.

For Raj, the initial ruling that his ransom payment supported a terrorist group led to more than two years in U.S. immigration detention, followed by more years of electronic monitoring. His waiver allowed him to bring his wife to the United States after nine years apart. She now studies nursing.

(Reporting by Mica Rosenberg in New York and Yeganeh Torbati in Washington; Additional reporting by Julia Edwards in Washington and Kristina Cooke in San Francisco; Editing by Sue Horton and Ross Colvin)