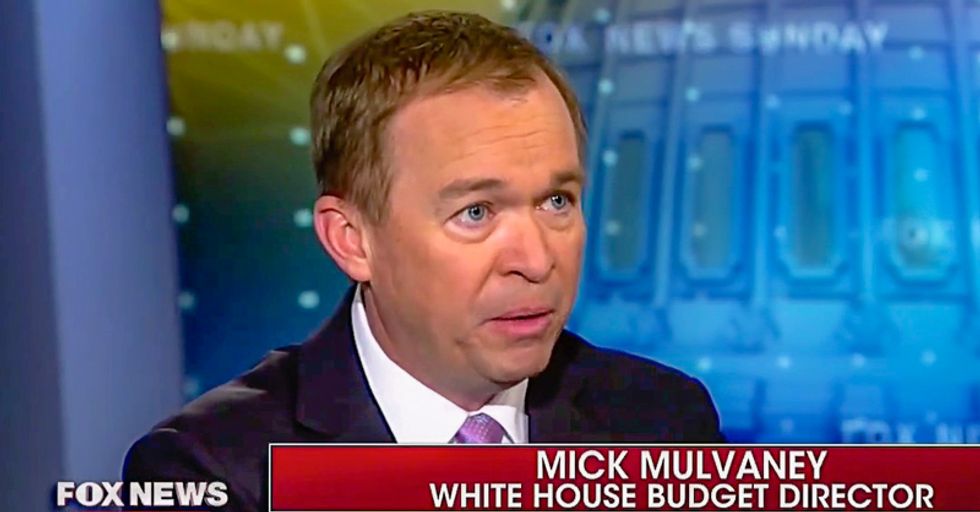 After years of Republican obstructionism under Democratic President Barack Obama, Trump Budget Director Mick Mulvaney said on Sunday that it was the Democrats who are guilty of "stunning" obstructionism because they will not negotiate on a bill to repeal the Affordable Care Act.

During an interview one Fox News Sunday, host Chris Wallace noted that the President Donald Trump had offered Democrats a deal: If you fund the border wall, payments to Obamacare will not be cut.

"You are holding hostage health insurance for millions of lower-income Americans," Wallace pointed out.

"Actually, what I would say is they're holding hostage national security," Mulvaney replied. "Again, something they supported in the recent past when President Obama was in the Senate."

"We're worried that this is sending a message that this is going to be the next four years," he added. "The Democrats will oppose everything that this president wants to do, which is stunning to us, especially when we are offering them something they want in return."

Wallace countered: "You're saying, give us what we want. And if you don't, we're going to cut off funding that would provide health insurance for millions of lower income Americans."

Mulvaney insisted that Trump was tying to build a border wall to "protect millions of low income Americans" who may lose their health care benefits in the tradeoff.