Trump is finally almost done resigning from his businesses 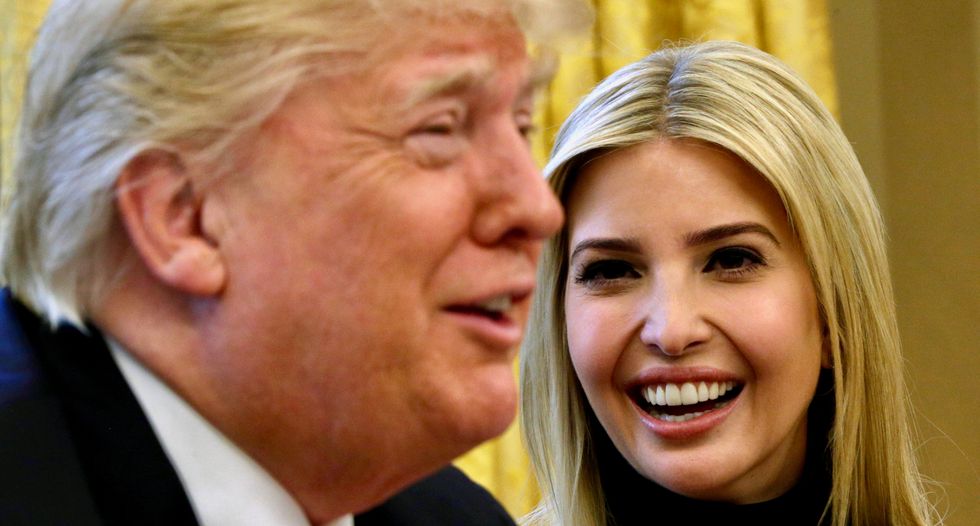 At a press conference before he took office, then-President-elect Donald Trump said he had signed paperwork "turning over complete and total control" of his business empire to his sons. His lawyer said the more than 400 businesses would be placed in a trust by Inauguration Day.

President Trump and his daughter, Ivanka, are closing in on removing their names from the one business where they are still listed as managers on state filings.

That business is the Trump SoHo, a hotel and condo tower in lower Manhattan. The company only filed an application in March to remove Trump and Ivanka as managers listed on state liquor licenses. The application is still pending New York's approval.

New York requires companies to register management changes within 10 days. Bill Crowley, a spokesman for the New York State Liquor Authority, said the two-month delay in filing is a violation, but a "common error made by corporations that does not usually result in prosecution" provided state officials receive new documentation "within a reasonable amount of time."

The White House referred all questions about Trump SoHo to the Trump Organization. In a statement, the Trump Organization said "all of the necessary paperwork to remove President Trump from the licenses associated with his businesses was validly filed with the appropriate agencies months ago. Unfortunately, the approval process does not always happen overnight."

We first revealed Trump's failure to transfer control of his businesses on Inauguration Day. Following our story, Trump did start filing the necessary paperwork with states. (Here are all of those filings.)

Former White House ethics attorneys, both Republican and Democrat, have said even Trump's completed transfer of management duties is far from enough. They say that the president needs to either sell his companies or put them in a blind trust run by an outsider.

"It really doesn't matter if he's listed on these documents or not. It's all part of his efforts to distance himself, but he hasn't sold anything," said Richard M. Painter, a former White House ethics counsel under President George W. Bush and a critic of Trump's trust arrangement. "From an ethics standpoint, it's all about ownership and he's not willing to part with anything."

The Trump SoHo, which is right next to ProPublica's offices, has wrestled with lawsuits and financial troubles ever since Trump announced plans to build it in the 2006 season finale of his reality TV show, "The Apprentice."

The project opened shortly before the financial crisis, leading to sluggish sales. One of Trump's partners in the deal, Felix Sater of the Bayrock Group, was a convicted felon and later a confidential informant who had been imprisoned for stabbing a man in a bar fight. In 2010, Bayrock, another partner, the Sapir Organization and the Trump Organization settled a fraud lawsuit in which condo buyers claimed the sponsors inflated condo sales numbers.

Under Sater and the Sapir Organization (whose founder, Tamir Sapir, died in 2014), the project went into foreclosure. The Los Angeles-based CIM Group then bought a controlling stake.

Trump is no longer a part owner of the condo tower. But the owners still contract with the Trump Organization to manage and market the property. Trump gets 5.75 percent of Trump SoHo's annually operating revenues for that work.

In 2015, according to the federal financial disclosure reports, Trump made $3 million off of the deal.

Five CIM representatives are currently also listed on the liquor license as principals along with President Trump, Donald Jr. and Ivanka.

Elisabeth Gawthorp contributed to this report.