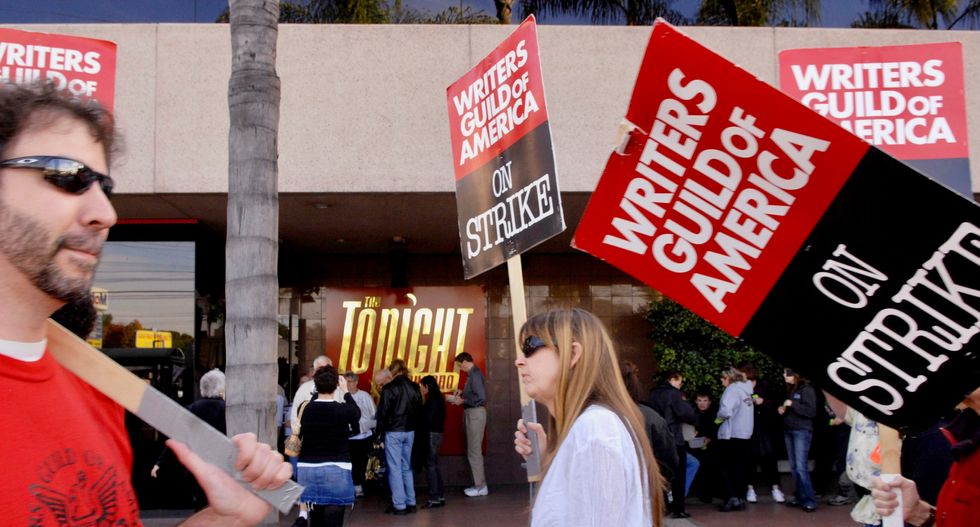 U.S. President Donald Trump may finally get a break.

Late-night talk shows and topical satire, including NBC's "Saturday Night Live," will be the first hit if the Writers Guild of America (WGA) goes on strike next week in a stoppage that media analysts say could send viewers flocking irreversibly to streaming services.

Contract talks are likely to go down to the wire this weekend to avert a strike by some 9,000 TV and movie writers should they fail to reach a deal with the Alliance of Motion Picture and Television Producers (AMPTP) by Monday night.

"A strike of any duration will drive audiences off broadcast and cable platforms and onto digital," said Jonathan Handel, an entertainment lawyer and contributing editor for the Hollywood Reporter who wrote a book about the last WGA strike in 2007-2008.

At the heart of the dispute is the television revolution in which Netflix Inc, Amazon.com Inc and Hulu have upended the traditional model of fixed "seasons" consisting of around 22 episodes of scripted comedy and drama.

The new trend is for fewer episodes - eight to 10 in many cases - but TV writers are still paid per episode. Royalties (known as residuals) are lower for streaming services than networks, resulting in earnings for the average TV writer-producer dropping by 23 percent in 2015-2016 compared with 2013-2014, the WGA says.

"In a time of unprecedented demand, TV writers are, illogically, earning less," the WGA said in a briefing paper.

"No one wants to strike. The prospect is kind of terrifying," said Los Angeles-based Nadria Tucker, a writer on the WGN drama "Underground." "But the business is changing so quickly that we are all just trying to catch up."

Movie studios are releasing fewer films - 114 in 2013 compared with 204 in 2006 according to a WGA study - and sales of DVDs and rentals have dropped.

Neither side is commenting publicly on the talks, but any strike would quickly affect productions like CBS Corp's "The Late Show," Comedy Central's "The Daily Show" and "Saturday Night Live," which rely on teams of writers to pen topical jokes.

Trump and his aides have been a chief target of such barbs, including "Saturday Night Live" impressions by Alec Baldwin and Melissa McCarthy.

Daytime soap operas would go dark next, with the impact on scripted comedy and dramas felt later if a strike is prolonged.

"The (scripted) shows for this season have been produced already," said one TV network executive, who wished to remain anonymous because he is not permitted to speak to the media.

"And even if the strike goes for months, writers don’t generally start working on the fall shows until the summer. Some prep work might be missed, but that would be it,” he said.

The last WGA strike - a 100-day stoppage in 2007-2008 - cost the California economy an estimated $2.1 billion in lost output according to a Milken Institute review. TV viewership dropped 21 percent in the first week, according to Nielsen figures, and people turned to videogames and watching DVDs.

This time, the impact could be bigger.

In 2007, "Netflix had just started streaming and the iPhone had just been released. Today, of course, the environment is quite different," Barclays Capital analyst Kannan Venkateshwar wrote in a research note.

Streaming services, with deep program libraries, are likely to emerge the big winners in any prolonged strike. Such a shift "could result in lasting changes in viewership patterns," Venkateshwar said.

"Did you miss 'Breaking Bad'? Or you never quite caught it and you wonder what all the buzz was about? Maybe now's the time to discover it. The sell is so direct it's practically a neon sign," said Handel of the likely benefit to Netflix and Amazon.The Alliance of Motion Picture and Television Producers, which represents the media conglomerates Comcast Corp, Walt Disney Co, CBS Corp, Viacom Inc, Time Warner Inc and Twenty-First Century Fox Inc, said this week it is "committed to reaching a deal ... that keeps the industry working."

Meanwhile, TV networks are making contingency plans to add more reality and news programming to their summer schedules. Some are also considering buying shows produced in other countries, like Canada, network executives said.

Steve Burke, chief executive officer of NBCUniversal, said on the company's April 27 earnings call that he was "optimistic and hopeful that the writers' strike will get resolved."

Netflix chief content officer Ted Sarandos said on an earnings call last week that Netflix would be less impacted by a strike than mainstream networks because "we're not on such a rigid production schedule ... we're in year-round production."

Nevertheless, lawyer and author Handel said the industry is not as prepared as it was for the 2007 strike, when it had time to stockpile scripts, especially for movies.

"Just about no one anticipated this strike until about a month and a half ago so there isn't much that is banked," he said.