Up in Smoke: Marijuana activists cuffed after lighting up at US Capital 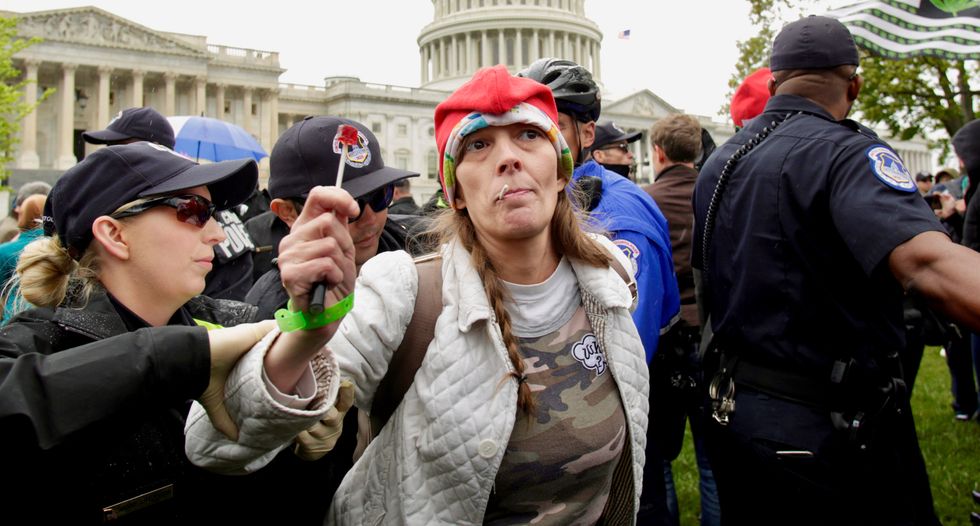 Two dozen red-hatted protesters gathered on the grounds of the U.S. Capitol on Monday to call for easing federal marijuana laws, but police snuffed out the party by arresting four of them after they lit up joints.

The activists, who carried marijuana-leaf flags and a sign saying "Let DC Tax and Regulate Marijuana," were calling for coast-to-coast legalization of the recreational use of marijuana and protections for those who use cannabis for medical reasons.

The protest included the recitation of Buddhist, Jewish, Christian and Rastafarian prayers on the lawn outside the domed national landmark.

But police swooped in and arrested the foursome as soon as they lit up in front of a crowd of media and sent smoke wafting across the grounds.

Marijuana is illegal under federal law and is banned from federal property like the Capitol, while more than two dozen states and the District of Columbia have legalized pot for medical or recreational use.

U.S. voters back legalization by a margin of 60 percent to 34

percent, the highest level of support for legalized pot ever

recorded by the survey.

U.S. President Donald Trump's administration has said that it might ramp up enforcement of federal laws against recreational marijuana use, setting up potential conflicts in states where the drug is legal.

Adam Eidinger, a protest organizer who recited a Jewish prayer before being arrested, told reporters that the sacramental use of marijuana on federal land deserves protection under the Constitution's guarantee of religious freedom.

"Meaningful marijuana legislation is something that a majority of Americans are demanding," he said. Capitol Police had no immediate comment on the arrests.

The protest was aimed at urging the Republican-controlled Congress to make cannabis legal and to lift a ban on the District of Columbia's regulation of marijuana. The Constitution gives Congress oversight power over the district.

Last week, police arrested several activists, including Eidinger, who were distributing joints near the Capitol to generate support for reforms.