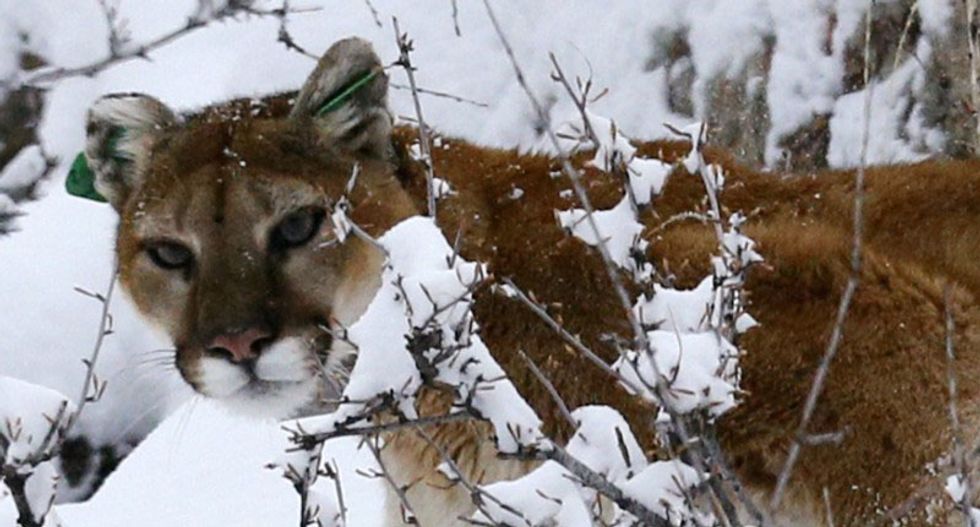 A mountain lion makes its way through fresh snow in the foothills outside of Golden, Colorado April 3, 2014. REUTERS/Rick Wilking

Wildlife conservation groups sued the U.S. government on Wednesday seeking to halt a plan to trap and kill as many as 120 mountain lions and black bears in Colorado in a bid to stem declines in populations of mule deer favored by hunters.

The lawsuit, filed in U.S. District Court in Denver, accuses the Wildlife Services agency, a branch of the U.S. Department of Agriculture, of violating federal law by failing to fully assess potential impacts of the predator-control plan on other native wildlife.

The same agency gained a measure of notoriety after one of its spring-loaded "cyanide bombs," used for killing coyotes and other "nuisance" animals, went off in the hands of a 14-year-old Idaho boy in March, injuring the youth and killing his pet dog.

Wednesday's lawsuit cites scientific research showing that habitat loss from oil and gas development, not natural predators, is mostly to blame for Colorado's plunging mule deer numbers. And it asserts that the plan for killing bears and mountain lions, originally devised by Colorado's own state wildlife managers, was designed to benefit hunters at public expense.

"The idea of using U.S. taxpayer money to kill native wildlife on public lands is outrageous," said Matthew Bishop, an attorney for the Western Environmental Law Center, a non-profit firm representing conservation groups in the lawsuit.

The case was brought by the Center for Biological Diversity and WildEarth Guardians.

They are asking a U.S. judge to bar Wildlife Services from implementing the plan before the agency thoroughly studies the likely consequences for the protected Canada lynx and other wildlife, as well as for the environment as a whole.

A Wildlife Services spokesman declined to comment on pending litigation.

The plan, which conservation groups had already challenged separately in state court, calls for the federal agency to conduct trapping and shooting of as many as 45 mountain lions and 75 bears in western Colorado over three years to boost mule deer numbers there.

The federal lawsuit also contests various lethal strategies Wildlife Services employs to remove animals believed to be harassing or harming livestock, saying such methods endanger wildlife other than animals that are targeted.

Among those are foothold traps, body-crushing traps, aerial gunning and the use of toxic gas cartridges to spray animals with sodium cyanide or to emit carbon monoxide into wildlife dens.

Wildlife Services on Monday suspended use of spring-loaded M-44s cyanide canisters in Idaho after last month's accident involving the boy and his dog.