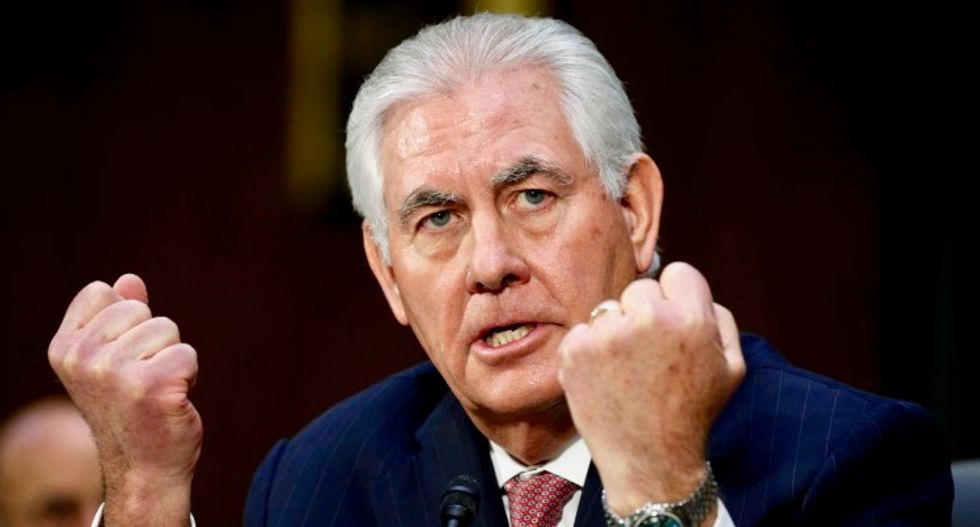 Iran and the United States traded barbs over the landmark 2015 nuclear deal on Thursday, with the U.S. leader accusing Tehran of not living up to the spirit of the accord and Iran's top diplomat urging Washington to fulfill its own commitments.

The exchange came a day after U.S. Secretary of State Rex Tillerson sent a letter to Congress saying Iran was in compliance with the nuclear deal but raising questions about Tehran's role in sponsoring terrorism in the region.

Tillerson accused Iran of "alarming ongoing provocations" to destabilize countries in the Middle East and said the Trump administration had launched a review of its policy toward Tehran that will include the 2015 nuclear deal.

In the first reaction to Tillerson's remarks from a senior Iranian official, Iranian Foreign Minister Mohammad Javad Zarif, who tweeted that the United States should "fulfill its own commitments."

Asked at a news conference in Washington whether he thought Iran was abiding by the nuclear agreement, President Donald Trump criticized the accord, saying it was a "terrible agreement" and Tehran was doing a "tremendous disservice" to the deal.

"Iran has not lived up to the spirit of the agreement and they have to do that," Trump said, adding that the administration was "analyzing it very, very carefully" and would have more to say about it soon.

Under the nuclear deal, the State Department must notify Congress every 90 days on Iran's compliance under the so-called Joint Comprehensive Plan of Action (JCPOA). Tillerson's letter on Wednesday was the first such notification since Trump took office.

Iran helped to create and continues to fund Hezbollah, the Lebanese military and political organization which the United States has listed as a terrorist organization.

Both Iran and Hezbollah are currently fighting in support of Syrian President Bashar al Assad's forces. Iran has also sent military advisers and fighters to neighboring Iraq, where they are taking part in the Baghdad government's operations against Islamic State.

The historic deal between Iran and six major powers restricts Tehran's nuclear program in exchange for the lifting of international oil and financial sanctions against the Islamic Republic.

The Trump administration's inter-agency review of policy toward Iran will examine whether the lifting of sanctions against Tehran is in the U.S. national security interests.