US weighs its options in Afghanistan despite risk of deeper involvement 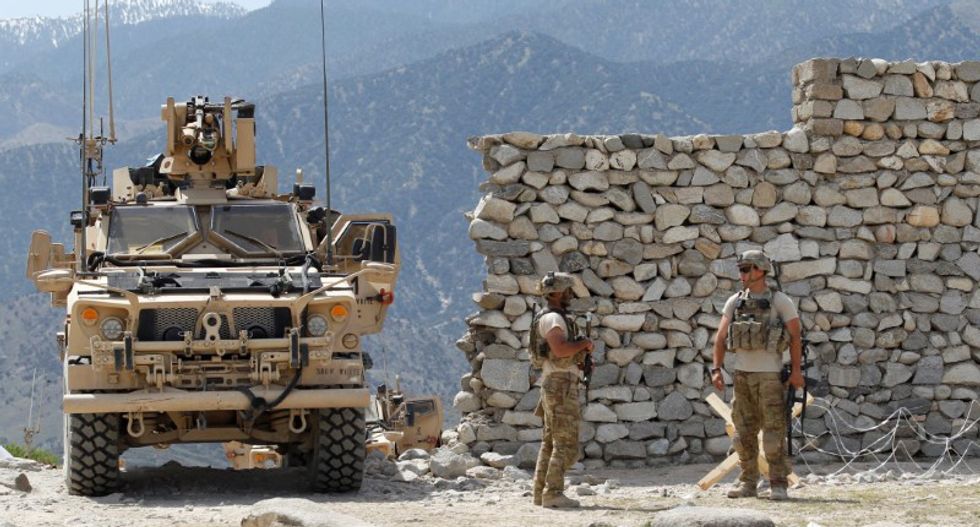 U.S. soldiers stand guard near the site of a U.S. bombing in the Achin district of Nangarhar province in eastern Afghanistan April 15, 2017. REUTERS/Parwiz

As President Donald Trump's administration drafts an Afghanistan policy, U.S. officials are seeking a way to reverse gains by militant groups without wading deeper into a 15-year-long war that has no end in sight.

In the past month, three U.S. service members have been killed in operations against Islamic State militants near Afghanistan's porous border with Pakistan, where armed groups still find sanctuary.Officially, the U.S.-led international force in Afghanistan ceased combat operations at the end of 2014, but the conflict has proved difficult to exit without risking the overthrow of the government in Kabul.

Current and former officials, speaking on the condition of anonymity, said the Trump administration is carrying out an inter-agency review, and while no decision has been made, the discussions revolve around adding 3,000 to 5,000 troops.

One of the officials said there is an emphasis on avoiding artificial deadlines. Former President Barack Obama wanted to reduce the number of U.S. troops in Afghanistan before he left office. He had ordered in more troops in 2011 that peaked at about 100,000.

Nearly 9,000 U.S. troops remain in Afghanistan; some 7,000 of them train and assist Afghan forces, and about 1,500 are a part of a counter-terrorism unit that mostly targets pockets of al Qaeda and Islamic State fighters, but also engages the Taliban.

In February, Army General John Nicholson, the U.S. commander in Afghanistan, said he needs several thousand more international troops to break a stalemate with the Taliban.

Some U.S. officials question the benefit of sending more troops to Afghanistan. To date, more than 2,300 Americans have been killed and over 17,000 wounded since the U.S. invaded after the Sept. 11, 2001, attacks.

These officials, who agreed to discuss political deliberations only on the condition of anonymity, said the situation in Afghanistan is even worse than they had expected, and that any politically palatable number would not be enough to turn the tide, much less create stability and security.

"Before you can get to the question of how many troops is enough you have to have clarity on what is the goal," said Christine Wormuth, former undersecretary of defense in the Obama administration.

"Is the goal to decisively defeat [the Taliban] and make Afghanistan into a viable state (or) is the goal to continue to prop up the government of Afghanistan?" Wormuth said.