WATCH: CNN's Tapper has to break it to GOP Rep that she hasn't actually read the bill she's ready to vote for 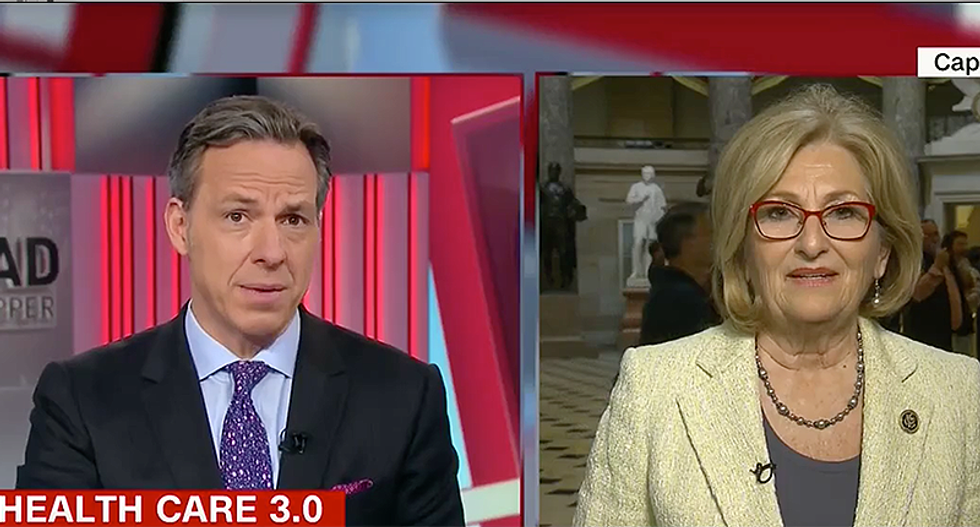 Rep. Diane Black (R-TN) didn't seem to know that the latest round of legislation to repeal and replacement Obamacare was a new piece of legislation.

During a conversation with Jake Tapper, the CNN host was forced to explain to Black that there haven't been any hearings on the Obamacare 3.0 bill and that the CBO hasn't had time to score the legislation. Republicans previously complained that Obamacare was passed too quickly and that no one had the opportunity to read it. Obamacare actually spent a year working through Congress, including numerous committees, two full House votes, one Senate supermajority vote and multiple hearings.

The Obamacare 3.0 vote that is supposed to take place prior to President Donald Trump's "First 100 Days" mark will have had none of these things other than a House majority vote, if it even makes it that far.

"I have to say, the public knows nothing -- next to nothing about this legislation, and obviously it will impact tens, if not hundreds of millions of Americans," Tapper told Black. "Would it not be better to have discussion and debate and hearings about this bill instead of what looks like rushing it through to meet this 100-day deadline?"

"Oh, my goodness, Jake. We had a lot of discussions," Black claimed. "Our ways and means committee went until 4:00 a.m. I think we had something like 18 hours of debate, even more than that in the energy and commerce committee."

Black's comments are actually about Obamacare 2.0, not the current bill and Tapper called her out on it.

"This is different legislation," he schooled Black. "It might be based on the previous legislation, but it has been changed."

Black admitted that Tapper was correct but that it's "basically what you saw come out of committee." She confessed there were some changes, but they weren't that big of a deal.

"Believe me," as Trump would say.

WATCH: CNN's Tapper has to break it to GOP Rep... by sarahburris