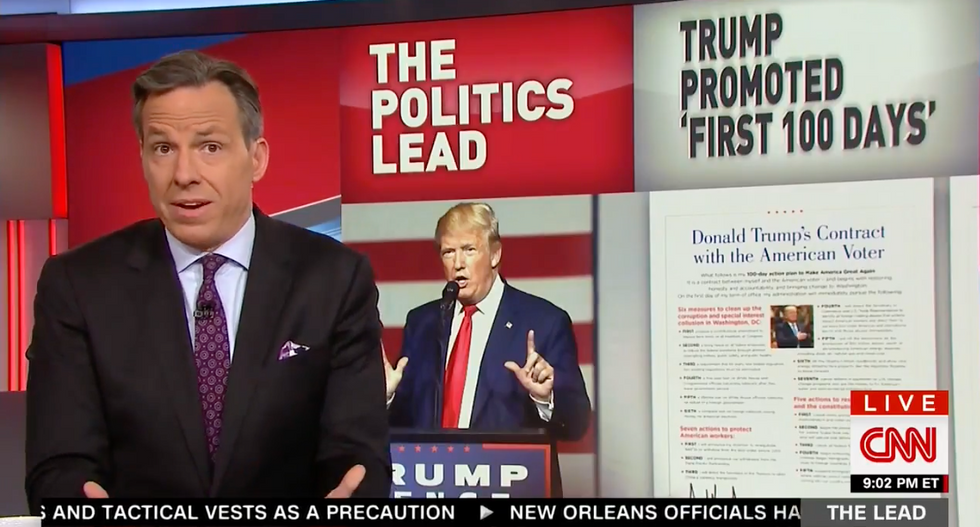 “With historically low approval ratings and zero pieces of major legislation signed into law, President Trump has had a disappointing first 100 days,” Tapper began during a special primetime edition of “The Lead,” noting “perhaps that's the reason [Trump] recently tweeted about the ‘ridiculous’ standard of the first 100 days.”

“The only reason I bring up the 100 days conceit is because you know who was one of the biggest boosters of the 100-day standard?” Tapper asked, before rolling several clips of Trump rattling off promises during campaign rallies last year.

“Now the president says it's a ridiculous standard,” Tapper reminded viewers, “He changed his tune on this marker—this very conceit that he promoted with his 100-day action plan. Which is not really a surprise, because President Trump often heralds his flexibility.”

The CNN host contrasted Trump’s campaign-era declaration that “NATO is obsolete” with his assertion “on day 83 as commander-in-chief, standing next to the head of NATO” that the organization is “no longer obsolete.”

“Magic,” Tapper said dryly. He then showed Trump exposing similar polar opposite opinions on everything from whether unemployment numbers matter to whether anyone knew “healthcare could be so complicated.”

“None of this is to say President Trump has not been busy, he has been,” Tapper conceded. “Supreme Court nominee Neil Gorsuch is Justice Gorsuch. There was the military strike against [Syrian president Bashar al-]Assad. Two immigration bans, both of which have been stopped by the Courts."

Watch the takedown below, via CNN: