WATCH: Joy Reid ridicules Trump for weaseling out of first pitch at Nationals game to ‘avoid the boos’ 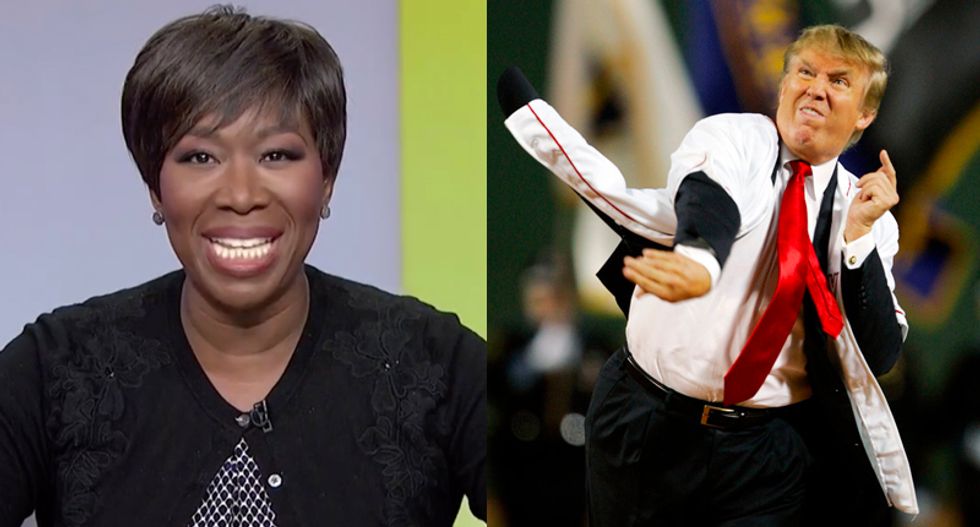 MSNBC host Joy Reid took a shot at President Donald Trump on Sunday morning for claiming he was unable to throw out the first pitch at the Washington National's home opener because of "scheduling issues."

The AM Joy host explained that there is a long tradition of presidents tossing out the first pitch while making the point that Trump had previously said at one time he was the best baseball player in the state of New York.

"Baseball season officially kicks off today, followed by a dozen match-ups on Monday. including the home opener for the Washington Nationals, the team that asked Donald Trump to throw out the ceremonial first pitch," Reid began. "It's tradition, after all. Every sitting president has thrown a first pitch at least one major league baseball game since President William Howard Taft threw out the first ball for the Washington Senators in 1910."

"Trump declined on Tuesday to step up to the mound because of, quote, 'scheduling issues,' " she continued. "But we can't help to wonder if that's the real reason why, especially because Trump actually played baseball."

Noting a 2014 interview in which Trump boasted, "I was the best baseball player in New York when I was young," Reid an eyebrow before comparing him to youthful contemporaries Mickey Mantle, Roger Maris and Yogi Berra of the New York Yankees.

Reid went on point out that Trump previously found time to toss out first pitches while sharing photos of Trump's painful delivery.

Then she got down to why Trump ducked out on a chance to be in front of TV cameras before a packed house at Nationals Park.

"Could it be that Trump, who is clearly no Mariano Riviera, wants to avoid the boos and hisses that could greet him at Nationals Park, where a whopping 90 percent of voters chose Hillary Clinton over him?" Reid suggested. "Trump may not be so popular with the players either."

"Close to 30 percent of the players on the MLB opening rosters in 2016 were born outside of the United States," the MSNBC host continued. "Perhaps no other sport echoes the immigration patterns as well as baseball. Players representing Venezuela, the Dominican Republic, Cuba and Mexico. Countries that Trump has vowed to shut out with both policy and a physical wall. Not very sporting."