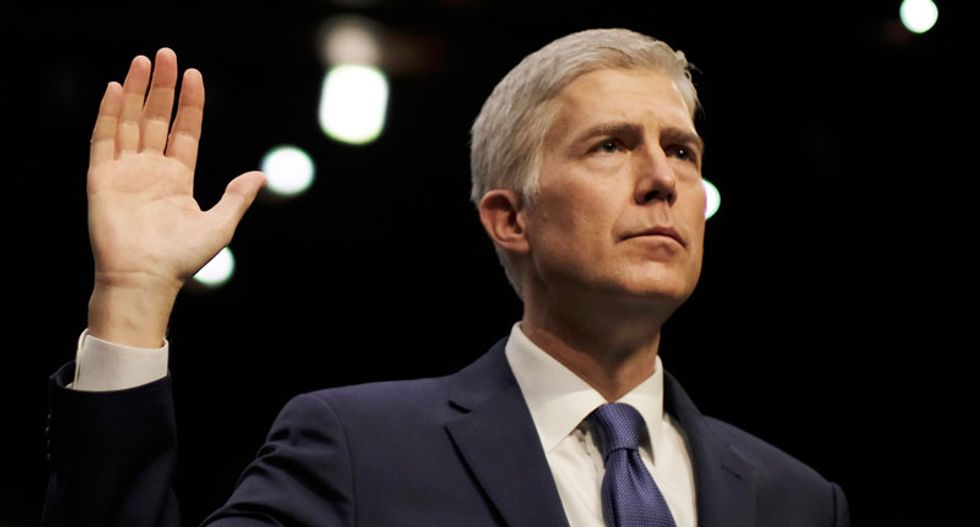 The U.S. Senate prepared for a vote on Thursday that will test the resolve of Democratic opposition to President Donald Trump's Supreme Court nominee and likely prompt Republicans to change the chamber's rules to allow conservative judge Neil Gorsuch's confirmation on Friday.

With ideological control of the nation's highest court at stake in the fierce political showdown, the Senate vote is a bid by Republicans to try to end a Democratic procedural tactic called a filibuster aimed at blocking Gorsuch's confirmation to a lifetime post on the court. The vote is expected at 11 a.m. (1500 GMT).

Republicans were expected to fall short of being able to halt the filibuster, but have said they have the votes needed to change long-standing Senate rules to prohibit filibusters against Supreme Court nominees. Republicans said Gorsuch would be confirmed on Friday one way or the other.

"This will be the first and last partisan filibuster of the Supreme Court," Republican Senate Majority Leader Mitch McConnell said on the Senate floor on Thursday ahead of the vote.

The rule change, which requires a simple majority, has been dubbed the "nuclear option" because it has been considered an extreme break with Senate traditions, and Trump has encouraged McConnell to "go nuclear." Republicans control the Senate 52-48.

Republicans insist Gorsuch is qualified and blame the Democrats for politicizing the confirmation process.

Democrats accuse Gorsuch of being so conservative as to be outside the judicial mainstream, favoring corporate interests over ordinary Americans in legal opinions, and displaying insufficient independence from Trump.

"This isn’t really about the nominee anyway. The opposition to the this particular nominee is more about the man who nominated him and the party he represents than the nominee himself," McConnell said.

He blamed the escalation of fights over judicial nominees on the Democrats and their opposition starting three decades ago to nominees made by Republican former Presidents Ronald Reagan and George W. Bush.

McConnell called the Democratic effort against Gorsuch "another extreme escalation in the left's never-ending drive to politicize the court and the confirmation process." He accused Gorsuch's opponents of "a singular aim: securing raw power no matter the cost to the country or the institution."

Senate confirmation of Gorsuch, 49, would reinstate the nine-member court's conservative majority, allowing Trump to leave an indelible mark on America's highest judicial body and fulfill a top campaign promise by the Republican president.

A filibuster requires a super-majority of 60 votes in the 100-seat Senate in order to proceed to a simple majority vote on a Supreme Court nominee or legislation. Senate Democratic leader Chuck Schumer has amassed enough Democratic votes to be able to mount a successful filibuster.

Democratic Senator Richard Blumenthal said on Thursday Gorsuch did not answer senators' questions at his confirmation hearing last month, raising doubts about his views. "He evaded, he dodged," Blumenthal said.

Ahead of the vote, about 20 protesters with a group called Democracy Spring held a sit-in demonstration at one of the Senate's office buildings, chanting, "Stop Gorsuch" as police officers surrounded and then arrested some of them.

"They try to stop us but we be comin' back," the protesters chanted.

The group argued that Gorsuch would protect big corporations instead of average citizens.

Experts said eliminating the filibuster for Supreme Court appointments could make it more likely that presidents, with little incentive to choose centrist justices who could attractive support from the other party, will pick ideologically extreme nominees in the future.

Ending the filibuster would make it easier for future Supreme Court nominees to be confirmed when the president and Senate leadership belong to the same party.

Republican Senator John McCain, known as a defender of Senate traditions, offered reluctant support for the rule change, but said it would likely lead to judicial nominees "from the extremes of both left and right."

The 60-vote threshold that gives the minority party power to hold up the majority party has forced the Senate over the decades to try to achieve bipartisanship in legislation and presidential appointments.