‘We have to protect our legends’: Rapper T.I. slams Trump for ‘belittling and demeaning’ black community 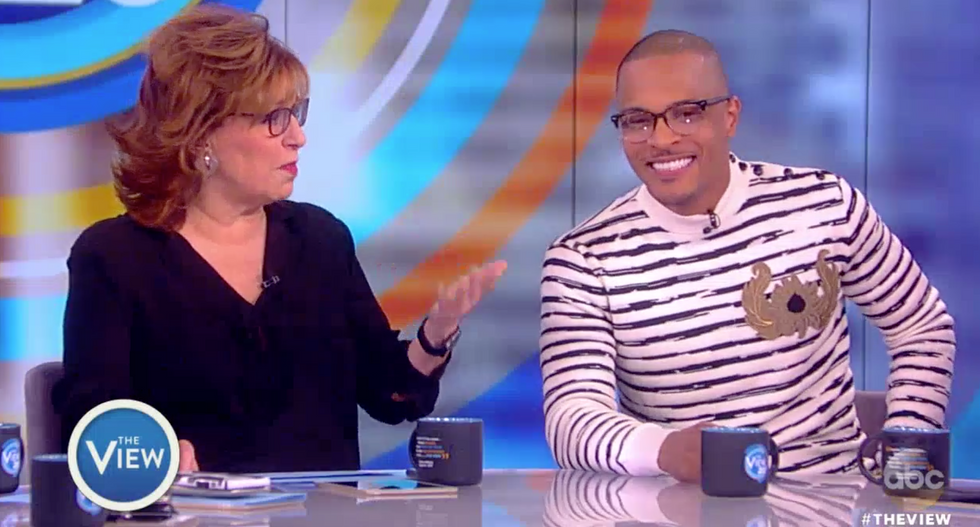 Rapper T.I. on Thursday defended the black community against Donald Trump, arguing that before he “can get anywhere with this president,” black leaders need to “address all of the disrespect and degrading that was done in the campaign.”

T.I. joined The View to discuss last month’s feud between Snoop Dogg and the president of the United States. In a new video for his song “Lavender,” Snoop Dogg aimed a fake gun at a clown made up to look like Trump. The video infuriated Trump, who took to Twitter blast Snoop Dogg.

Can you imagine what the outcry would be if @SnoopDogg, failing career and all, had aimed and fired the gun at President Obama? Jail time!
— Donald J. Trump (@Donald J. Trump)1489575760.0

T.I., in response, posted a very NSFW Instagram message to the president. Asked about the post by co-host Joy Behar, T.I. defended his remarks.

“As an African American young man who came from poverty and used my life and lifestyle—along with my talent—to bring myself and my family up, out of the wreckage, and create a new way of life for ourselves,” T.I. began. “So we have a community, and in this community you aren't going to come and challenge or try to belittle or demean us or our advancements, by no means, shape, form or fashion.”

Sunny Hostin offered that perhaps Omarosa Manigault can “bridge the gap” between the Trump administration and the black community.

“She can’t even bridge the gap in her teeth,” T.I. replied.

“Just speaking openly and honestly about it, before we can get anywhere with this president, we have to address all of the disrespect and degrading that was done in the campaign,” the rapper continued. “And that was my issue when people were going in there to meet with him … not that they shouldn’t be meeting with them, but before you stand and smile and take pictures, what about addressing the disrespect and the disregard for our community.”