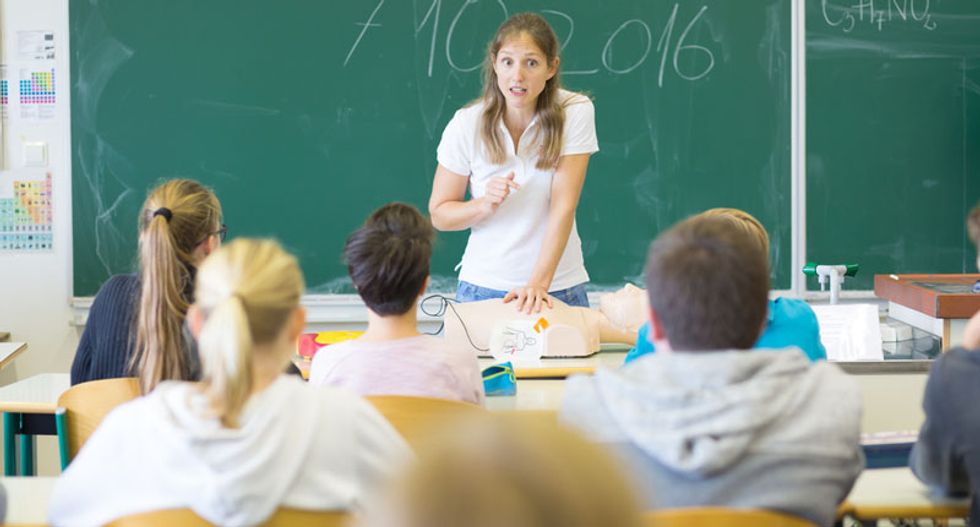 Students and teacher in a classroom (Shutterstock)

The white principal of a predominantly black elementary school in Florida will be reassigned after instructing teachers to keep white students together in their classes. Parents at the school, who have been protesting with community leaders over the past week, described Christine Hoffman's transfer to another school as putting “a Band-Aid on the problem.”

Hoffman, who heads Campbell Park Elementary School, sent a memo to faculty last Tuesday with a series of directives on class size and composition. Under the heading “Class List Guidelines,” Hoffman wrote, “Student numbers need to be even for each class” and “all students need to be highlighted by their reading level.” She also included this note: “White students should be in the same class.” The letter stirred outrage among parents and a local NAACP chapter.

In the face of calls to resign and parent protests, Hoffman reportedly sent a second letter in which she apologized for the "poor judgment" behind the original list. She called the error a “mistake” and seemed to recognize the need to educate herself for the benefit of her black students, though she didn’t reference any future training.

“As a white woman leading a predominantly black school, I am approaching this as an opportunity to learn,” Hoffman wrote, per the Washington Post. “Although I have participated in training on diversity and implicit bias, this recent incident makes it clear that I need to seek additional opportunities to apply racial sensitivity and cultural competence in my work. I want all of my actions and decisions as principal to only strengthen and unite our school as we meet the needs of our students.”

Hoffman invited parents to a meeting last Monday, during which two attendees told the Tampa Bay Times that she stated, “I am the best thing that has happened to Campbell Park."

Parents told local outlets that Hoffman admitted she had not received any complaints from white students or parents about racialized bullying or similar issues. The administrator reportedly said her goal was to "make students feel more comfortable." White students are not the only minority population at Campbell Park, though they are the school’s largest minority group. ABC affiliate WFTS reports that in a population of 606 total students, there are three Asian students, 18 multiracial students, 20 Hispanic and Latino students, and 49 white students. Hoffman did not issue letters asking that teachers cluster students of any other group to ensure their comfort.

"The parents said that as black people, we are used to being the only black person in the classroom and no one is making sure we are comfortable," Denise Ford, a community member who attended the meeting, told the Tampa Bay Times. "The parents were not accepting of any excuse. We accept your apology, but you have to go."

"If white parents wanted their children to attend another school, they would’ve placed them there,” Ebony Johnson, the parent of a fifth-grader, told the outlet. “They did not. So who is Mrs. Hoffman to decide to separate the whites from the blacks?"

Earlier this week, with continued pressure from parents and other community groups, school and district administrators announced that Hoffman had asked to be moved to another school. A robocall went out with Hoffman’s recorded voice stating, “Due to recent events, my presence has created a distraction. As a result, I’ve requested to transfer and allow another person to lead this school. This was a very difficult decision for me. The Campbell Park community has become part of my family and I want all of our students to be successful.”

Maria Scruggs of the St. Petersburg NAACP suggested Hoffman’s gesture reveals a wider problem with racial attitudes across the board.