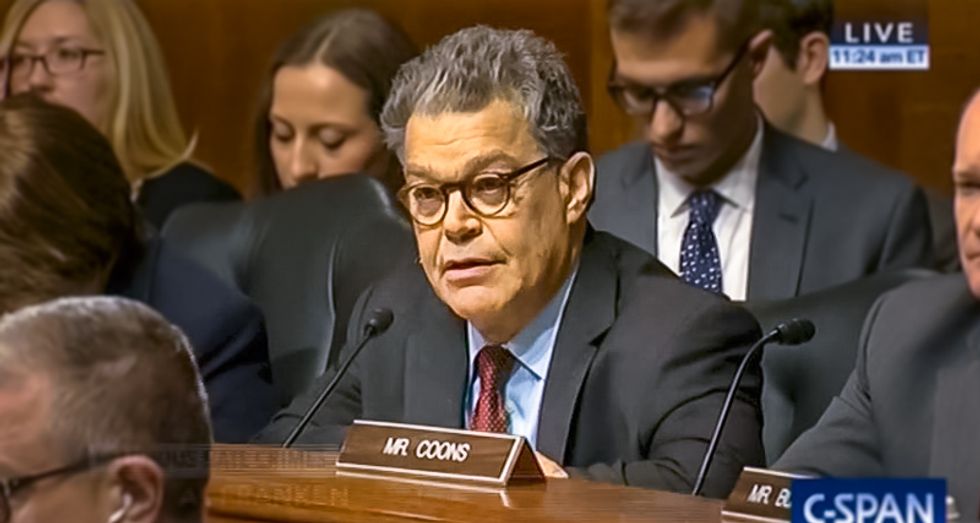 A Justice Department attorney was at a loss for words on Tuesday after Sen. Al Franken (D-MN) asked him how President Donald Trump's choice of Steve Bannon as chief strategist impacted hate crimes in the United States.

At a Senate hearing on religious hate crimes, Special Counsel For Religious Discrimination Eric Treene argued that there was not enough data to fully address the rise in religious hate crimes. More than 150 Jewish community centers were targeted with bomb threats this year, but Treene suggested that the number could be higher because law enforcement agencies were not required to notify the federal government.

"Either through missteps or associations with controversial figures, the White House fails to speak clearly in opposition to bias and hate," Franken said. "I'm curious what message you think it sends to individuals who may engage in that kind of reprehensible behavior when the president selects Steve Bannon as his chief strategist."

Franken noted that under Bannon's leadership, Breitbart "trafficked in an ideology of racism, misogyny, xenophobia, homophobia, anti-Muslim propaganda and anti-semitism."

"The message I feel strongest as a prosecutor and as a attorney for the Department of Justice," Treene replied, stuttering, "is the consistent message I've gotten from the Attorney General to pursue hate crimes."

"I'm not saying the message you got," Franken interrupted. "You're not committing any of the religious hate crimes. I'm talking about the people who do. What message does it send to them, not you, that Mr. Bannon is the chief strategist?"

"Right," Treene said, wringing his hands. "I was encouraged as were you by the president's remarks before Congress."

"Yeah," Treene agreed. "I can only really speak for myself and I have been consistently given the message to continue pursue cases on behalf of Muslims."

"Certainly, you must have some perspective on this that you can share with us," Franken pressed, "on what it means when the president selects as a special counsel someone who's trafficked in anti-Muslim propaganda."

"You know, with all due respect, I am here talking about hate crimes and can only stress that I've had a consistent message that we should continue to pursue these mosque cases... and these hate crime cases regardless of the religion of the victim," Treene opined.

"I'm concerned with sending out a message that we will enforce the law for all persons," he said.