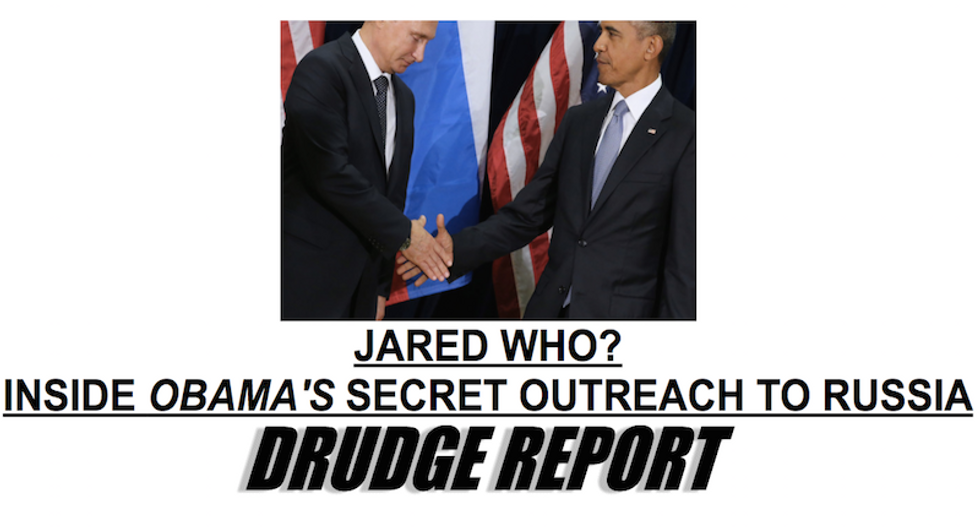 A two-year-old report on "Obama's secret outreach to Russia" hit the top spot on the conservative Drudge Report after hundreds of bot accounts flooded Twitter with links to the article.

The report published Dec. 31, 2014, by Bloomberg View outlines the Obama administration's behind-the-scenes diplomatic efforts to improve relations with Russia, which were spearheaded by then-Secretary of State John Kerry and included input from several Cabinet-level agencies.

Kerry suggested to Russian Foreign Minister Sergei Lavrov that some U.S. sanctions could be eased if Russia abided by the multinational Misnk agreement and stopped direct support for Ukrainian separatists.

Renewed interest in the story is clearly related to a Washington Post report on Jared Kushner, the president's son-in-law and senior White House adviser, asking to set up a secret line of communication between the Trump administration and the Kremlin using Russian diplomatic facilities.

Kushner privately breached the topic with Russian ambassador Sergey Kislyak during meetings during the presidential transition period that he later failed to disclose, as required by law, on security clearance forms upon joining the White House staff.

By contrast, the Obama administration's discrete communications with Russia appeared to follow standard diplomatic protocols, even if the efforts did not enjoy the strong support of either nation's president at the time.

The original Bloomberg report largely disappeared from Twitter after interest died down a few weeks after its publication, but it began recirculating over the weekend.

Two posts appeared to have been shared directly from the Bloomberg site early Saturday morning and Sunday evening, but then a deluge of posts using the same phrasing and tags burst forth starting at 12:48 a.m. and continuing every two or three minutes for the next 11 hours.

Many of those accounts, at least in the early hours of the social media push, display the distinctive traits of bots -- with highly unbalanced posting-to-followers ratios, inscrutable account names, few public interactions and almost no original content phrasing.

The report gained traction later in the morning, as the report found its way into more apparently human accounts.

The Drudge Report news aggregation site posted a link to the two-and-a-half-year-old story Monday morning, with the headline "Jared who? Inside Obama's secret outreach to Russia," and it soon became the top story on the site with above the masthead banner placement.

Former FBI agent Clint Watts, a cybersecurity and terrorism expert, testified before Congress in March that Russia used bot accounts on Twitter to push anti-Clinton propaganda aimed at elected Trump during the final weeks of the presidential campaign.

Watts told lawmakers that many of those accounts switched over post-election toward pushing false or misleading stories aimed at influencing Trump, the world's most famous Twitter user.

“I can tell you right now, today, that gray outlets, that are Soviet-pushing accounts, tweet at President Trump during high volumes when they know he’s online, and they push conspiracy theories,” Watts testified.

On Wednesday evening, Fox News host Tucker Carlson let slip a fleeting but surprising turn of phrase that promptly stunned many of his critics.

While discussing the treatment of a man charged as a part of the Jan. 6 Capitol insurrection, Carlson tried to draw a comparison to the case of Bree Newsome, a filmmaker and activist who tore down the Confederate battle flag at the South Carolina statehouse in 2015, leading to her arrest.

A Florida company is peddling a notorious industrial bleach solution as a "miracle cure" for new variants of the coronavirus.

Chlorine dioxide, a dangerous chemical compound used in textile and paper manufacturing, has previously been marketed as a cure for cancer, HIV/AIDS and even autism, and now Miami-based Oclo Nanotechnology Science is making the so-called "miracle mineral solution" in a makeshift laboratory and selling it as a cure for COVID-19, reported The Guardian.