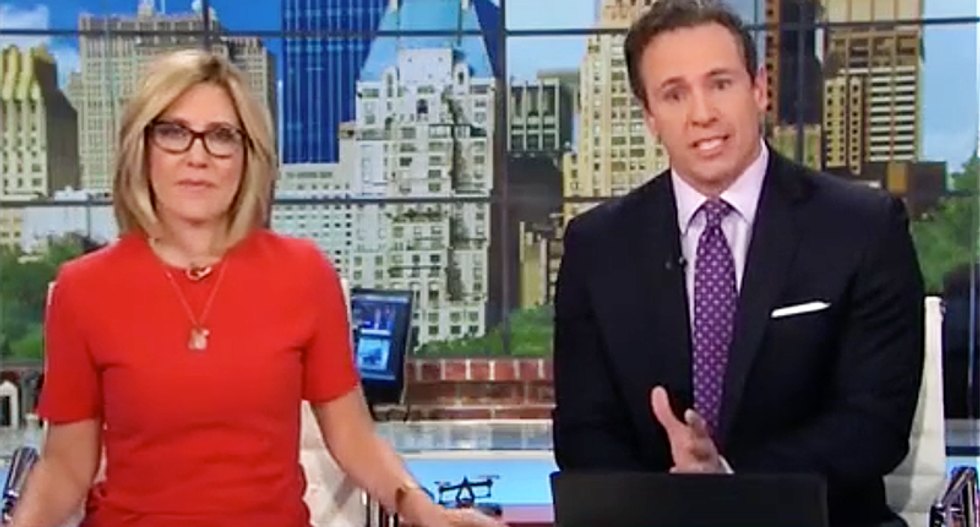 According to CNN's Chris Cuomo, no one in the Republican leadership would appear Monday morning to defend President Donald Trump’s firing of former FBI director James Comey.

Cuomo cited Sen. Chuck Schumer (D-NY), who asked whether any patriotic Republicans were willing to put country ahead of party.

"It is a pickle the president has put his party in here," Cuomo noted. "That's what leadership is about, right? If you choose to ignore, you are in effect, empowering whatever you ignore."

Commentator David Gregory agreed, but said that he believes it is "demeaning to reduce the conversation and controversy to partisan politics and allowing a conversation to unfold that the Democrats are being hypocrites because they wanted Comey out all along. Come on. Focus on what was done. They made up a reason to get rid of Comey."

Gregory went on to say that the idea the GOP actually cared about the treatment of Hillary Clinton is not anything anyone actually believes.

"They did it in the middle of the Russia investigation," Gregory continued. "They tried to get him to pledge loyalty. You know, Trump was thinking, 'Oh, this guy, Comey, he will feel bad about how he handled Clinton and now he's going to go after the Russia thing harder.' And he was mad about the leaks and the rest because Trump walks around the White House thinking Clapper and the intelligence community of the United States is conspiring against his presidency. He is holding the electoral map with all of the red on it showing that he really should be president and that is what is driving President Trump and that part is really sad."

He went on to say that he believes the GOP leadership is missing something if they don't tell Trump that he's endangering everything he claimed he cared about.

"Healthcare legislation? I mean, I've talked to people who were in meetings with the president who said he has no understanding of or real care of the health care legislation," Gregory continued. "Or there could actually be some real compromise. Big sweeping tax reform? Very hard to see if they can't get a budget passed. And you've got Democrats who are very happy to stay on the sidelines."

Cuomo noted that Republicans could also be afraid. Trump could very easily come after fellow Republicans who don't support him.

"If you've already made your deal with the devil, so to speak, you're thinking to yourself, 'If I let this devolve into a food fight, I get nothing,'" commentator David Drucker noted.

Chris Cuomo says no Republicans were willing to... by sarahburris