‘Did I call you a n****r? No’: White NC teacher caught on camera comparing black student to a slave 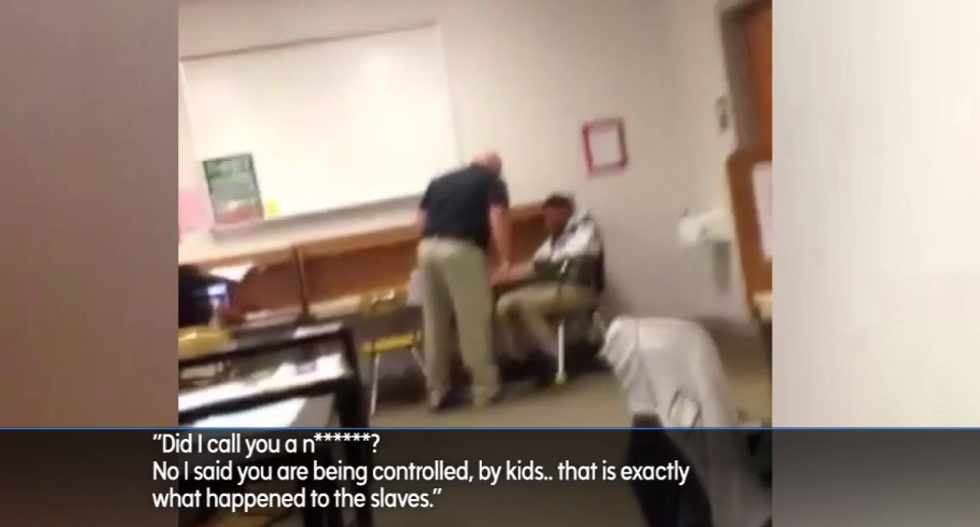 A teacher in Apex, NC was suspended after a video posted on Snapchat showed him shouting “n*****” at a student and comparing that student to a slave.

Damon Warren, age 13, said his Apex Middle School teacher grew agitated when a group of kids started laughing in the classroom, ABC 11 reports. The teacher then used the slave analogy to describe how Warren is “being controlled” by other students in the class.

"Did I call you a ’n*****?’" the teacher can be heard saying in the video. “No, I said you are being controlled, by kids. That is exactly what happened to the slaves. They were controlled by their owners, you're letting him control you and you're the one who's getting in trouble."

"I didn't know what to say,” Warren said. "He started calling me a slave. He could have said it different instead of using that analogy that I was his slave."

Ayona Wilson, Warren’s mom, pulled her son out of school after seeing the video.

"It's more so hurtful than anything because I would never want my children to expect that," Wilson said.

“Teachers should know what to say, what not to say to these children,” Wilson continued. “He also had to know some of the things he says can hurt people and that is going to stick with my son forever.”

Wake County School District said they were investigating the incident. The teacher has been suspended, with pay, while that investigation continues.

In a statement mailed to parents, Apex Middle School said they “regret having to share” news about the incident.

“I want to make it clear that we have high expectations for behavior and policies addressing codes of ethics for the teachers in our building,” the statement reads. “We strictly adhere to these expectations and enforce these policies.”

Watch the video below, via ABC 11: