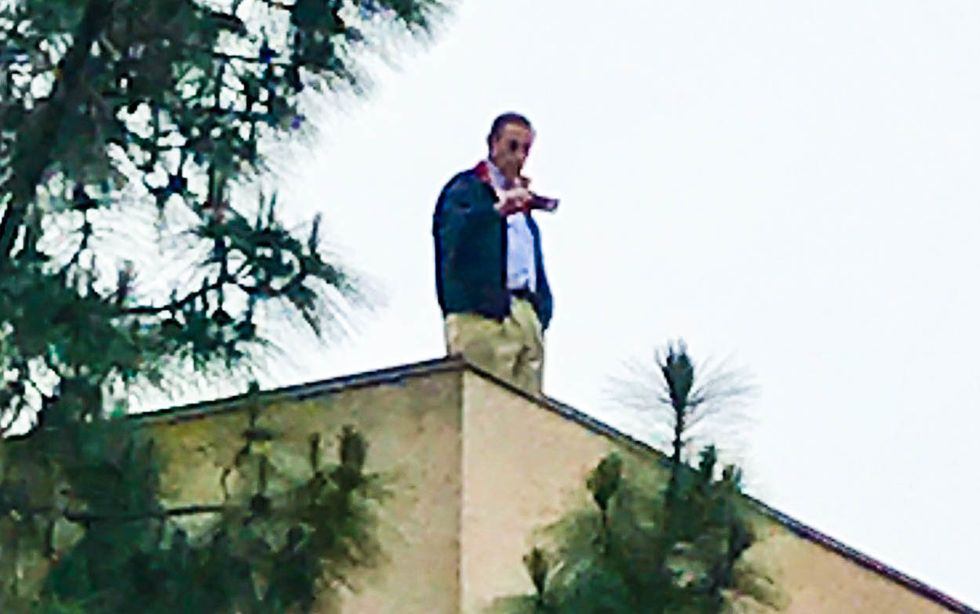 Darrell Issa spotted on the roof of his district building as constituents protest below (Photo via Twitter).

Rep. Darrell Issa (R-CA) was spotted on the roof of his district office building on Tuesday looking out at a crowd of angry constituents that he had avoided on his way into the building.

A photo of Issa on the roof was posted by Mike Levin, a California Democrat who is running to unseat the nine-term congressman in 2018. In the photo, Issa appears to be holding a phone and filming all the hundreds of protesters who lined up across the street from the building.

"Yes, this is really Darrell Issa on the roof of his district office building," Levin wrote. "Too afraid to come speak with assembled constituents below."

Yes, this is really @DarrellIssa on the roof of his district office building. Too afraid to come speak with assemb… https://t.co/HKfoxKKws1
— Mike Levin (@Mike Levin) 1496165511.0

Levin noted that Issa earlier in the day had walked past protesters at his office but didn't interact with them in any way.

Joshua Stewart, a writer for the San Diego Union-Tribune, said he received an angry call from Issa over the incident.

I just received an unprompted call from @DarrellIssa who said he tried, unsuccessfully to speak with protesters outside his district office.
— Joshua Stewart (@Joshua Stewart) 1496170215.0

.@DarrellIssa said the protesters wouldnt' speak with him, so he went up to the roof and took pictures.
— Joshua Stewart (@Joshua Stewart) 1496170275.0

.then @DarrellIssa called me an "operative" for his opponents, and " It's interesting that the paper has become as small as your words.”
— Joshua Stewart (@Joshua Stewart) 1496170407.0

In 2016, Congress passed a law that was supposed to make the military justice system more transparent, instructing the U.S. military’s six branches to give the public broader access to court records. Seven years later, the Department of Defense has finally issued guidelines for how the services should comply with the law, but they fall far short of the transparency lawmakers intended.