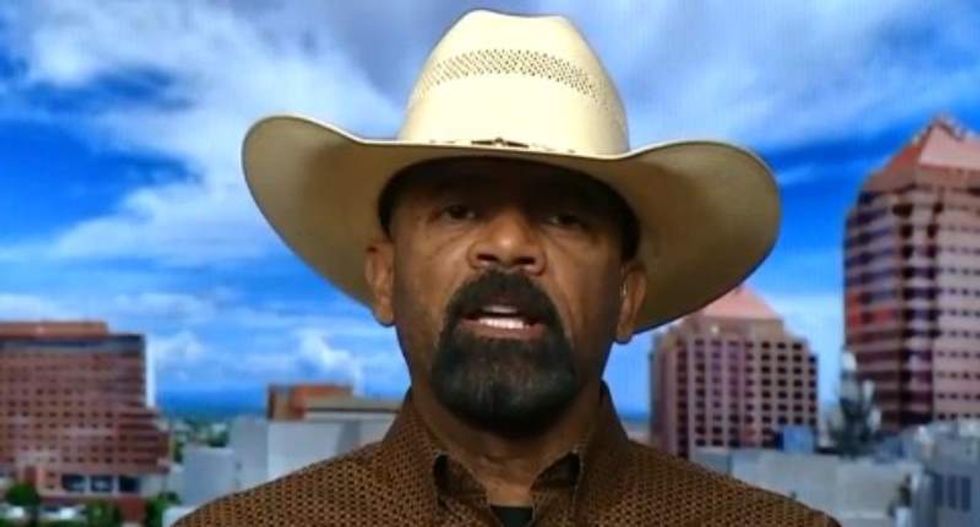 A former member of Attorney Gen. Jeff Sessions' Senate staff and aide to several Republicans on the Senate Judiciary Committee sent out a viciously anti-immigrant, Latino-bashing email in the name of fundraising for a U.S. Senate campaign by Milwaukee Sheriff David Clarke, a darling of right-wing media.

The trouble is, according to Mother Jones magazine, Clarke -- who bills himself as "the black Rush Limbaugh with a badge" -- isn't running for a U.S. Senate seat in Wisconsin or any other state. But that's not slowing down Jack Daly, who has joined together with a cabal of right-wing pundits and reality TV stars urging Clarke to run for higher office.

The email -- one of a series sent out by Daly -- was sent out May 6 and echoes the type of nativist anti-immigrant rhetoric that President Donald Trump used to kick off his campaign in June of 2015.

In a rant about Milwaukee County and its decision to be a so-called "sanctuary city," Daly -- who lives in North Carolina -- wrote, "Remember: the hard Left nimrods running Milwaukee's government have declared Milwaukee a 'Sanctuary City' and the schools 'Sanctuary Schools' — safe havens where illegals who have been convicted of murder, gun running, dope dealing, rape, and robbery since coming to American unlawfully can hide for the rest of their natural lives, or until they themselves get murdered in another drug deal gone bad."

Daly called a recent demonstration against Clarke a "revolting display of anarchy" attended by "tens of thousands of assorted criminals, illegal aliens, deportables, and miscellaneous Mexican flag-waving types," as well as "confused and marginalized American university professors, pot heads, and other miscreants."

Daly simultaneously claimed that protesters were bused in from other cities, but that also "Milwaukee seems to be full of godless liberals whose main fetish is to harbor these criminal illegals, and help them escape from justice."

He went on to fan the flames of his readers' grievance by telling them that "illegals" are stealing their tax dollars.

"You paid for their food and their shelter and their medical care while they were in the jail, and for welfare for their dependents and free public education for their kids," he said. "And when you were their victims, you paid with your property or your lives."

Clarke is a favorite guest on conservative media, which extend a perennial welcome to any black conservatives who will spout negative talking points about liberals.

However, he is highly controversial in Milwaukee County, where county medical examiner Brian Petersen alleges that Clarke threatened him in an effort to suppress a coroner's office report that a 26-year-old inmate died of dehydration under Clarke's jurisdiction in the Milwaukee County Jail.

Four people -- including a newborn baby -- have died in the Milwaukee County Jail since Clarke became sheriff. Accusing Clarke of "gross mismanagement," state legislators have called for Clarke to resign.

Last month, a "Joy Reid Show" panel mocked Clarke -- who was polling at 31 percent approval among voters -- as headed for electoral defeat.