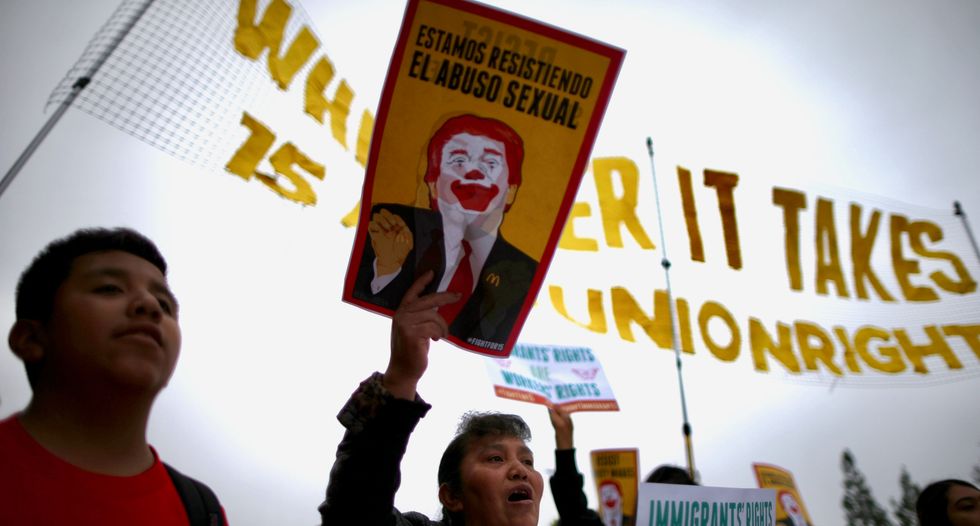 Fast food workers and supporters protest outside of a McDonald's restaurant for higher wages and union rights as part of the national "Fight for $15" movement in Los Angeles, California, U.S., May 24, 2017. REUTERS/Lucy Nicholson

Hundreds of fast-food workers demanding wage increases marched on Wednesday outside of the McDonald's Corp headquarters in a Chicago suburb during the company's annual shareholder meeting.

The demonstrators were part of a larger, nationwide protest organized by the labor group "Fight for 15," which has regularly targeted McDonald's calling for higher pay and union rights for workers. Dozens of protesters also rallied outside of United Airlines shareholder meeting in downtown Chicago.

"I saw my mother, who worked 30 years for Hardees, struggle on food stamps to raise her family and now I'm doing the same thing," said Terrance Wise, a 42-year-old from Kansas City who was protesting outside the McDonald's meeting.

Wise said he has worked at McDonald's for three years and still only earns $7.65 an hour for the full-time job. He said he also relies on food stamps to support his three daughters.

"Instead of paying their CEO $15 million, they should give him $10 million and pay their workers what’s right," he said. The Fight for 15 group's main demand is for a minimum wage of $15 an hour. Chief Executive Steve Easterbrook earned $15.3 million in total compensation last year, according to company data.

Shareholders inside the McDonald's meeting did not ask about the protests during a question and answer session with company officials.

Easterbrook focused on the fast-food giant's plans for delivering food with UberEats and the roll out of new products.

The company said on Wednesday it invests in its workers by helping them to earn degrees and acquire on-the-job skills. In 2015, the company raised the average hourly pay to around $10 for workers in the restaurants it owns.

However, most U.S. McDonald's workers are employed by franchisees who set their own wages.

Workers' hopes for an increase in the $7.25-per-hour federal minimum wage were dashed last year when Republicans retained control of Congress in the U.S. election. Opponents of raising the minimum wage say higher costs would force restaurants to cut hiring, and some businesses would not survive.

Scores of protesters were arrested during a nationwide protest weeks after Republican Donald Trump won the White House in the November election. At various times on the campaign trail, Trump suggested U.S. workers were overpaid, but also that the minimum wage should be raised.

"I can't take care of my kids. We need to be paid a living wage," said Betty Douglas, a 59-year-old mother of three and McDonald's employee said on Wednesday in Oak Brook.

Staring into space or sobbing, family members of those missing in the Florida apartment building collapse waited in anguish for news of loved ones, while others scrambled for a place to live after their home was destroyed.

The disaster in Surfside, near Miami Beach, left one person dead and 99 unaccounted for after the collapse early Thursday, with fears the toll may rise much higher.

A statue of George Floyd was defaced and marked with the name of a neo-Nazi group in New York, police said Thursday, less than a week after it was unveiled.

Police officers said the nearly two-meter-tall monument to the 46-year-old Black man murdered by a police officer in May last year was found covered in paint on Thursday morning.

Bones found in an Israeli quarry are from a branch of the human evolutionary tree and are 120,000 to 140,000 years old, scientists reported Thursday.

A team of anthropologists spent years analyzing the fragments of a skull, lower jaw bone and tooth that were uncovered in Nesher Ramla in 2010, comparing them to hundreds of fossils around the world from different eras.