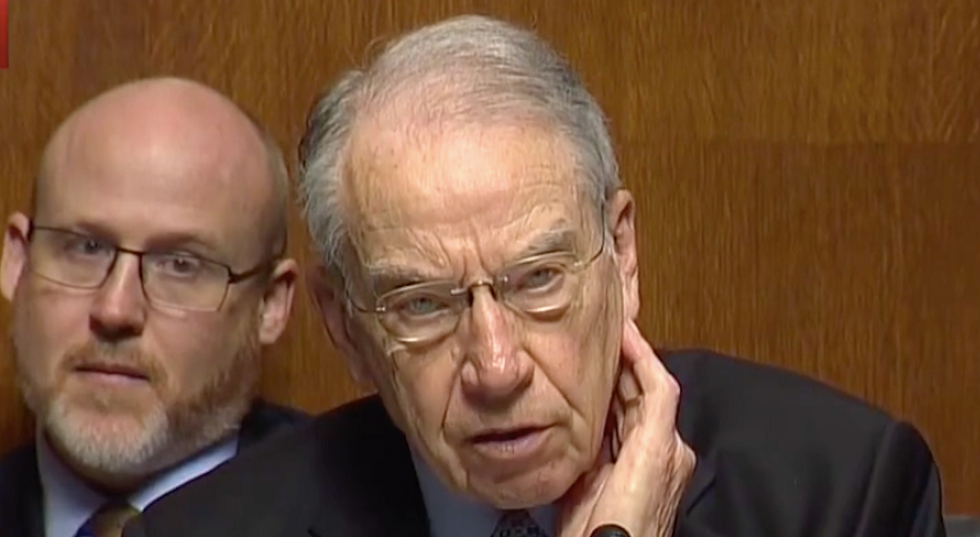 During FBI Director James Comey's hearing before the Senate Judiciary Committee on Wednesday, Sen. Chuck Grassley (R-IA) got annoyed with the fact that Comey repeatedly refused to answer his questions about the Steele dossier on President Donald Trump on the grounds of confidentiality.

Would the director discuss the FBI's relationship with Christopher Steele? Comey replied that he has briefed Grassley privately on that subject and cannot address it in an open hearing. Did the FBI bring any matters concerning Mr. Steele before a federal judge? Comey said he can't discuss it. Does the FBI's policy allow the agency to pay outside investigators for research they've already been paid to do by someone else?

"I'm not sure," Comey replied, but promised to get back to the senator about that.

Grassley said if Comey cares that Steele paid his sources and that he has received conflicting materials as to whether or Steele has a formal relationships with the FBI.

Comey replied that he would happy to provide the senator with any relevant documents that he needs, "because I don't believe there's any inconsistency, there's just a misunderstanding, but in a classified setting I'll give you what you need."

Grassley complained that people filing Freedom of Information Act (FOIA) requests about Steele, Russia and interference in the 2016 election are getting more information than is being made available to the Senate Judiciary Committee. He became heated when Comey said he's not sure that Grassley has his facts straight, but that he would, again, be happy to review the materials with the senator in a classified setting.

"Well, just as a matter of proposition, then," snapped Grassley, "if I, Chuck Grassley, as a private citizen, file a Freedom of Information Act and you give me more information than you'll give to Senator Chuck Grassley, how do you justify that?"

"It's a good question," Comey said.

The Steele Dossier is a 32-page file of intelligence data regarding President Donald Trump's 2016 campaign and its interactions with the Russian government, as well as compromising information -- "kompromat" as it's called by the Russians -- about Trump, his finances and extensive connections to Russia's ruling class.

The dossier reportedly contains explosive allegations about Trump and his aides including salacious accounts of Trump's reported dalliances with Russian sex workers. The dossier was first publicized by BuzzFeed, then picked up by CNN while many journalistic organizations steered clear of the revelations.

As months have passed, however, more and more of the allegations in the dossier have lined up with investigators' findings.