‘He incriminates himself every day’: Morning Joe panel explains how Trump is sealing his own doom 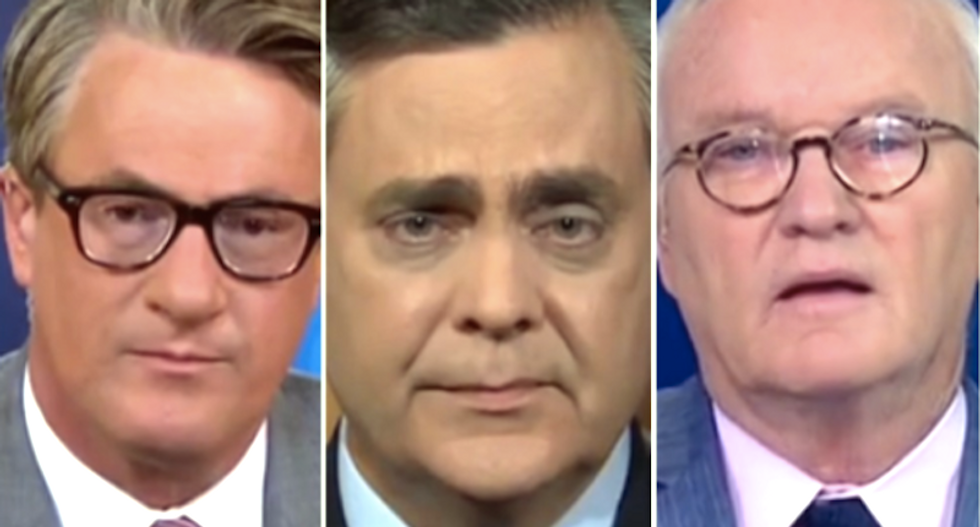 The news that President Donald Trump asked the two top U.S. intelligence officials to push back against the Russia investigation could be the most clear evidence of a cover-up that has yet been revealed, according to panelists on MSNBC's "Morning Joe."

Panelist Mark Halperin, senior political analyst for MSNBC and Bloomberg Television, said the news was perhaps the most serious development yet and showed top government officials believed the White House was trying to delay, politicize or even obstruct the investigation.

"There are echoes of Watergate here," Halperin said.

MSNBC legal analyst Jonathan Turley, a professor at George Washington University Law School, said the president's actions were "grossly inappropriate," although he's not sure there's enough evidence to impeach at this point.

"There's no question that this is a pattern of self-incriminating conduct," Turley said. "Perhaps the first time in history you find someone so self-incriminating in the absence of a known crime. It's like a guy running every time a car alarm goes off -- you're sort of wondering why."

Host Joe Scarborough pressed Turley to explain whether a president had executive power to kill an investigation up until a grand jury was empaneled.

"If you have somebody actively killing an investigation against them to prevent a grand jury from being impaneled, then do we not set the precedent that if you were an executive, you have carte blanche to kill any investigation up until the point that prosecutor is about to impanel a grand jury against you, and that's the new rule in the United States of America," Scarborough said. "Executives can do whatever they want to do as long as they kill an investigation before a grand jury. Doesn't that set a dangerous precedent?

Turley agreed, but he said obstruction charges were usually anchored to some type of judicial or congressional proceeding.

"You also have to show that this person tried to corruptly influence, sort of a curious term of art, what was occurring here," Turley said. "He can claim that this was harming the U.S. government's status in the world, it was distracting his government and he was asking whether anything could be done of these individuals."

The legal analyst said, in comparison to the impeachment of President Richard Nixon, no evidence of a crime had been presented to justify the obstruction charge.

"You usually need something stronger in terms of firing Comey -- he does have a lot of folks who said he should have been fired. Did he do the right thing in their view for the wrong reason? That's something we usually don't debate a great deal in terms of a criminal charge. You look for something a little more clear."

Scarborough said the president's conversation with senior Russian officials, as well as various public comments he and his spokespeople have made, showed that he fired the FBI director over his concerns about the Russia probe.

"He incriminates himself nearly every day, Joe, in one way or another," said senior contributor Mike Barnicle.

The veteran journalist suggested the president might simply have "complete ignorance of the process," and other panelists agreed -- but pointed out that was a flimsy defense.

Beatles for sale. A live and internet auction is underway, featuring items that once belonged to John Lennon and were left to his eldest son, Julian Lennon. Those pieces of pop culture history include a cape worn by the former Beatle in the film “Help!,” a coat Lennon wore in “Magical Mystery Tour” and a trio of guitars plucked by the “Starting Over” singer. The “Lennon Connection: The NFT Collection” auction, being curated by Julien’s Auction House, also includes Paul McCartney’s handwritten notes for the 1968 song “Hey Jude.” That tune was inspired by the tribulations of Julian Lennon, whose...

Stephen Breyer, the oldest justice on the US Supreme Court and the senior member of the bench's liberal-leaning wing, boasts a record of pragmatism in the hundreds of opinions he has authored in his long career.

The bespectacled California native, aged 83, was nominated to the nation's highest court by Democratic former president Bill Clinton, and US media reported Wednesday that he plans to retire at the end of the current term in June.